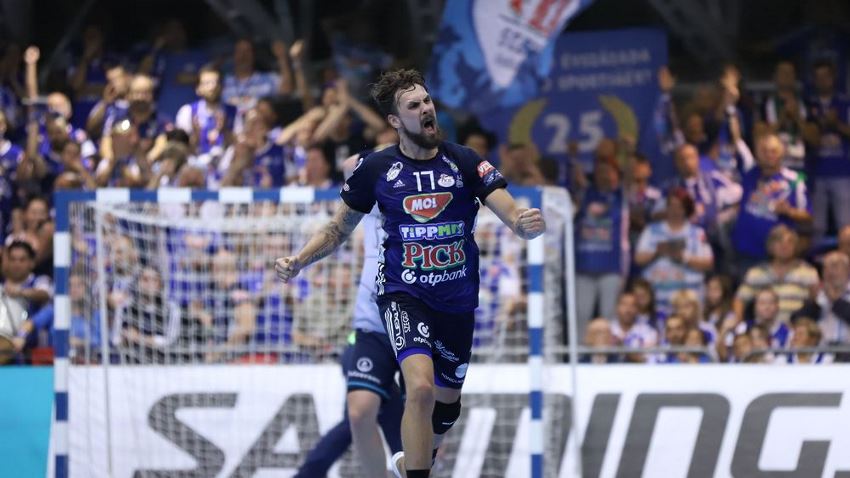 Sheer joy, a proposal and a record broken

Joy, emotion, a piece of history from a perennial contender and even an out of the box proposal. Oh, and some more funny gifs from PSG.

We have it all in the social media review this week, as round 3 of the VELUX EHF Champions League produced drama, surprises and some superb handball.

Another surprise win for Aalborg

Few would have expected the Danish champions to start the competition with three wins out of three games, but Aalborg have outdone themselves and risen to the challenge. They top group A, tied with PSG, and the joy was there to be seen after the 29:28 win against Celje Pivovarna Lasko.

However, Aalborg face three big challenges next, hosting MOL-Pick Szeged in Match of the Week, followed by Flensburg at home and a trip to PSG.

Keita, the GIF that keeps on giving

22-year old left wing Adama Keita had the game of his life in the European top competition, scoring eight goals against Elverum last week, in PSG’s 25:22 win, as his huge potential starts to be fulfilled. The French wing also featured in some of PSG’s crazy gifs, which can be seen below.

A surprise from the Norwegian fans

The Match of the Week between Elverum and PSG was a hit, as you can also see below, but the Parisian side never expected a bunch of Norwegian fans to come and say hello before the game. Despite Norwegian ace Sander Sagosen missing through injury, PSG are still loved in the North.

Match of the Week always attracts attention from the handball world, irrespective of the teams playing or the city in which it is hosted. Last week, Elverum had the chance to be a part of the show and everything went perfectly.

For the game against PSG, the Norwegian side chose the Hakons Hall in Lillehammer and 12,377 fans turned up, the largest attendance for a handball match in Norway. The hosts lost, 25:22, but the fans and both teams put on a show.

A few weeks ago, Flensburg celebrated their history – which includes one VELUX EHF Champions League trophy, one EHF Cup and two Cup Winners’ Cup, but also three German Bundesliga titles – and made possible for this beautiful and emotional clip to be aired. Some familiar faces and some sand art are the highlights which should be seen by every handball fan.

Barça’s stronghold as you never saw it

Barça are once again the cream of the crop in the VELUX EHF Champions League and are looking like favourites to take home the trophy. But what does home mean for the Spanish side? Well, the “Palau” is a superb arena, which also hosts Barça’s basketball and hockey teams. If you want to make yourself familiar with the arena, take a look at this superb video.

A joy to watch

Handball is a sport best felt in the arena, where the proper fans can create a superb feeling. Yet the arenas are usually capped and there are still fans who cannot take part at the show. Enter the TV option, where the broadcasting team and commentators can recreate a part of the feeling. Take a peek at how the Hungarian commentators celebrated some of Roland Mikler’s epic saves in the 24:24 deadlock between MOL-Pick Szeged and SG Flensburg Handewitt.

Kielce love to give back to their local community whenever they can and they duly delivered last week, when three of their stars – Blaz Janc, Angel Fernandez and new transfer and team captain Andreas Wolff took some time off and went to a training session of the juniors’ team. The kids surely learnt a trick or two from their idols and the joy can be seen on their faces.

A post shared by PGE VIVE Kielce (@kielcehandball) on

Proposing after a defeat

Meshkov Brest may have started the season with three losses in their first three games, but at least Montenegrin line player Branko Kankaras had a week that he will never forget. After the game against Kiel, a 31:23 loss in which he scored five goals, Kankaras decided to propose to his girlfriend, who said yes. Congratulations to the happy couple.

Meet and greet for Buducnost’s fans

With the VELUX EHF Champions League taking a one-week break, the focus moves to the DELO WOMEN’S EHF Champions League, throwing-off this weekend. Teams are already starting to promote themselves, both in fan activities and on social media, with Buducnost showing the team spirit and grit that usually bring on the court in this picture.

The fans in Podgorica will have the chance to meet their idols on Wednesday, before Buducnost face Brest Bretagne Handball on Saturday in the Moraca Arena.