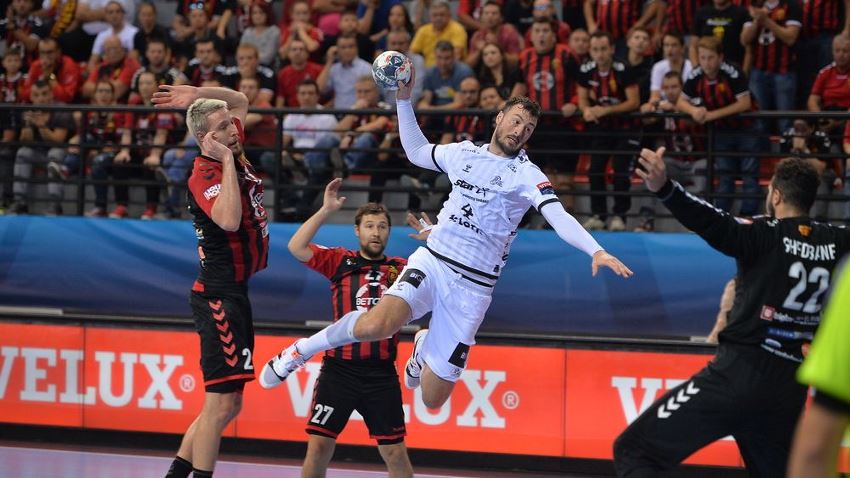 Vardar’s perfect record was shattered to pieces on Saturday evening, when a flawless first half from Kiel, who limited the Macedonian attack to only 20 per cent efficiency, lifted the German side to a 16:4 lead after 30 minutes.

Ultimately, the title holders were on the receiving end of one of their worst home defeats in the past decade, 31:20, as Kiel marked their fourth game unbeaten in a row this season.

While for the second season in a row, Montpellier snatched a win in Poland against national champions PGE Vive Kielce, this time after pulling clear at the start, and never looking back. The depleted French side earned their third win in a row, while Kielce lost their second game on the trot, 29:27.

Elsewhere, Brest finally stopped a six-game losing slide to take a 33:31 win against Motor Zaporozhye, in the battle between the two sides who had failed to win a point before this round.

A swift and gritty defence from Kiel frustrated Vardar’s powerful backs from the throw off, as the Macedonian side only scored their first goal after 11 minutes, after a flurry of 1 vs 1 misses and three magnificent saves from Danish goalkeeper Niklas Landin.

By that time, Kiel were already 4:0 up, therefore the Skopje side - who despite starting the game as the second best attack in the group, scoring 96 goals in the first three games - had a mountain to climb to maintain their unbeaten run.

Kiel’s own misses did not hamper the German side, as their defence stood their ground on another 7:0 run, fueled by Croatian playmaker Domagoj Duvnjak and German line player Hendrik Pekeler, which saw the often raucous Jane Sandanski Arena engage in a crunching silence.

There was no turning back from a 11:1 deficit after 20 minutes for Vardar, as their flawless record was shattered by an unstoppable juggernaut in Kiel.

With a meagre attacking efficiency of just 7 per cent, as wing Timur Dibirov missed three shots, the hosts took two timeouts, but were still left dumbfounded by Kiel, with the German side enjoying an out-of-this-world 16:4 lead at the break.

One of the worst, if not the worst, half in recent memory for the title holders could not be deleted from their memory in the second half, despite the Vardar attack becoming more efficient, scoring 12 goals in the first 16 minutes of the second half. But line player Hendrik Pekeler was unstoppable for Kiel, scoring eight goals, as the German side never backed down.

Despite Vardar limiting the gap to five goals, 23:18, after 48 minutes, Kiel enjoyed a superb 31:20 win, their third in a row, which propelled the Zebras to the top of the group, with seven points, after four rounds.

Vardar, who were leapfrogged by Kiel in the ranking, travel to Veszprem next week, while the German side will meet Montpellier, as they seek to expand their unbeaten streak to five games.

Goalkeeper Landin came in for well-deserved praise from coach Filip Jicha afterwards, "I am happy with the victory though I must say that I am really surprised that we defeated Vardar with such a big difference. I think the reason is in our defence and goalkeeper Landin, who did a great job especially in the first half."

The result was a bit of a reality check for Vardar's Timur Dibirov, "I want to congratulate THW Kiel for a really great game and a result we didn't expect. Before the match we said we wanted to see where we were against such a team and today we saw where we are. It is clear that we must continue to work and improve. Everybody saw what happened in the first half and we were trying to come back, but obviously at this point we weren't good enough." 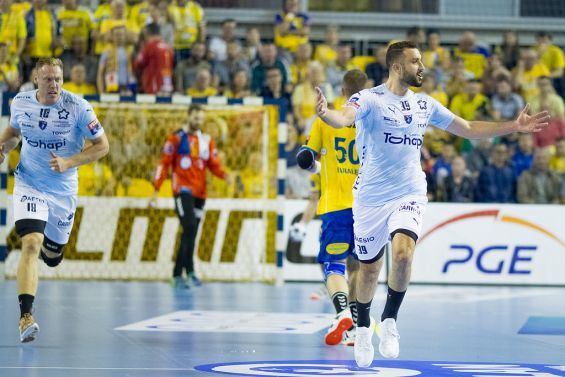 Kielce’s own court has been far from a stronghold in recent years, as Montpellier took an unexpected win last season in Poland, 28:27.

Despite the French side riding high in the VELUX EHF Champions League this season, Kielce were still the favourites, but the start was far from what coach Talant Dujshebaev expected from his side. A 2:0 gap, that grew into a 7:4 lead for Montpellier, buoyed by Tunisian left back Mohammed Soussi and left wing Hugo Descat, saw Kielce reeling, especially after losing the previous game against Porto.

The French side missed three key players, backs Melvyn Richardson, Diego Simonet and Jonas Truchanovicius, but this did not seem to faze Montpellier. Their defence contained superb back Alex Dujshebaev, as Kielce failed to get going in attack.

With eight outfield players scoring in the first half, Montpellier were still in front, 14:12, at the break, boasting a 64 per cent shooting efficiency. A cold-blooded Montpellier side looked in control in the second half, 20:16, as their defence worked wonders, while even goalkeeper Marin Sego contributed with a goal on the scoresheet.

With the back line not at full strength, Kielce relied on Slovenian wing Blaz Janc and line player Uladislau Kulesh, But it was not enough, as the understrength Montpellier side managed to keep calm and earn their third win in a row, 29:27, before they will host leaders Kiel next week.

Experienced Kielce head coach, Talant Dujshebaev, shouldered the blame for the loss, "We didn’t play on the level we should. I will always say that whatever we do, it’s my fault, not my players, I take a full responsibility for my team. In our changing room when you put on a yellow jersey, you need to be proud that you are a part of the team. We play together."

Patrice Canayer, coach of Montpellier HB, I’m very happy about the result. It’s hard to play here because of lots of tactical changes from our opponents. Tonight it was very interesting and we managed to win, congratulations to my players. In this game the lack of my four players was not so important, but it will be a problem in upcoming matches, because season is long." 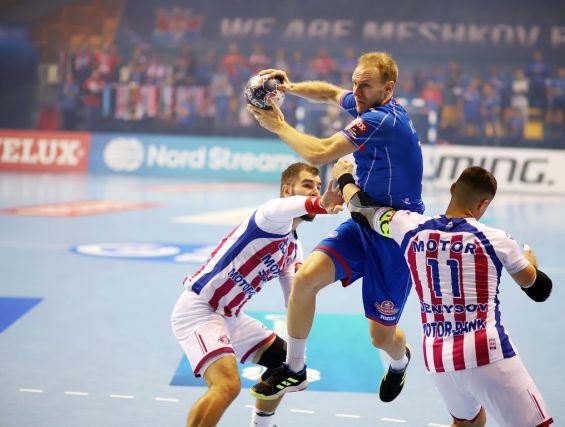 It was a battle for survival, as the losing team was going to be left behind after four games with zero points, with the winners finding fuel to try to earn a Last 16 berth.

Meshkov transformed their arena into a stronghold against any opponent in previous seasons, yet they failed to win since March in the European premium competition. And things were not looking good in the first half, as Motor took an early lead, 9:6, thanks to another great game from playmaker Barys Pukhouski.

A 4:0 run from Meshkov turned the game on its head, but there was one more lead change, as the Ukrainian side looked comfortable at the break, standing atop of a three-goal lead, 19:16. With 35 goals scored in the first half and almost no defence played, the two teams came with a more result-oriented mindset and there were only 17 goals scored in the first 21 minutes of the second period.

Meshkov rallied and even took a two-goal lead, 26:24, with ten minutes to spare, and they ultimately earned their first win of the season, 33:31. They are now tied Veszprem in the rankings, with two points, while Motor are still bottom, with four defeats in four games.

Meshkov's Raul Alonso was overjoyed at full-time, "I am very happy for the team, the fans and the whole of Brest. It is time for us to win. We faced many challenges and difficulties during the season. A number of key players are injured. At the same time, we were able to good segments in previous matches, which, unfortunately, did not bring results. Today's fight was supposed to bring success along with a good game."