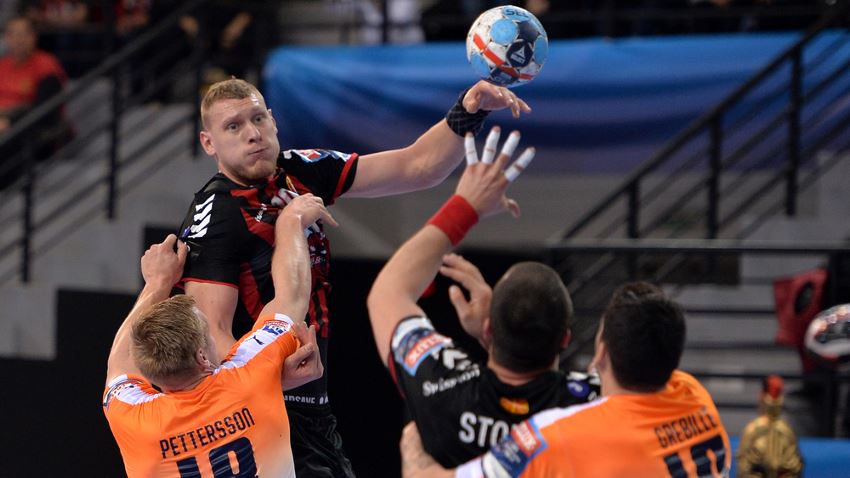 One of the biggest surprises in the history of the VELUX EHF Champions League was Montpellier HB winning the title last season. The memorable victory has been followed by a disappointing year for the French side, who are out of the competition after the group phase. Their loss in the last round on Saturday night, 27:33 against Vardar, was the final straw.

Already assured of finishing first in the group, Barça Lassa remained focused and beat Rhein-Neckar Löwen at home in the wake of an impressive first half. This win secured fourth place for PGE Vive Kielce, despite their loss to Telekom Veszprém HC in a thriller. Thanks to a one-goal win in the last seconds, the Hungarian side kept hold of second place.

It was more a question about pride than about handball, as the title holders faced an early elimination after a tough season, which saw injuries alternate with a lack of form in crucial moments. Yet Montpellier still controlled their fate, and a win against Vardar would have sent them through irrespective of what happened in the Match of the Week between Brest and Kristianstad.

However, Vardar had their own chances to progress to second place and would have never given up easily against the side that knocked them out in last season’s semi-final.

“We played with the champion of Europe, the team of Montpellier, who we respect very much. We were very motivated from the first minute and sent them a clear message that we are hosts and we want to win,” said Vardar line player Stojanche Stoilov. “Regardless of the fact that we had some slight downs in the game when they made pressure, I think we dictated the pace and deservedly won.”

The title holders bounced out after a critical first five minutes of the game, when left back Mohamed Soussi received a red card. The Macedonian side scored five unanswered goals that proved to be pivotal, as it took Montpellier more than eight minutes to find the goal.

With backs Dainis Kristopans and Igor Karacic in superb form, the hosts took a healthy 10:4 lead, while Montpellier were already in disarray. 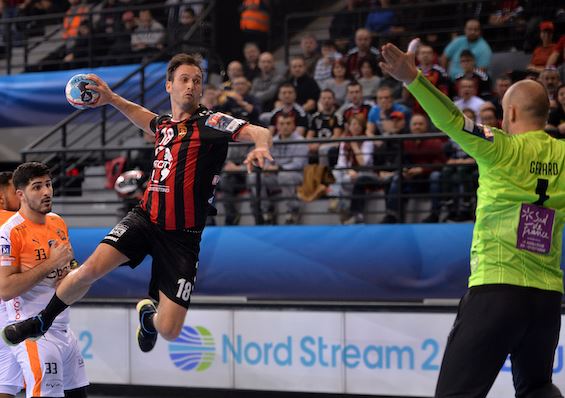 A comeback from Montpellier saw the lead cut to only two goals, 12:10. It was a collective effort that kept the French side in the game, but Vardar looked more poised in attack.

Flawless performances from line player Stoilov, back Kristopans and right wing Ivan Cupic led the home side to the victory, and Vardar held a 24:19 advantage with 15 minutes to go. At the buzzer, Vardar clinched third place in the group with their 33:27 win.

“We did not start properly. I think it was 0:5 and then we invested a lot of energy to get back,” said Montpellier’s Vid Kavticnik. “In the second half we started well, but we were a bit tired, we made a lot of mistakes in attack and we received easy goals. That's why we lost. I hope that we will continue well in the domestic championship and we will concentrate on the future.”

With that, the title holders finished a thoroughly disappointing season, being eliminated after their 10th loss in the group phase.

For their last home of the group phase, Barça offered their fans a real offensive festival. Making the most of the German side’s turnovers, the hosts rushed in fast breaks.

With Lasse Andersson and Victor Tomas missing nothing, the Spanish side were already ahead by six after 10 minutes (8:2) and by eight, 12:4, after 17 thanks to a goal into the empty net from goalkeeper Kevin Møller. 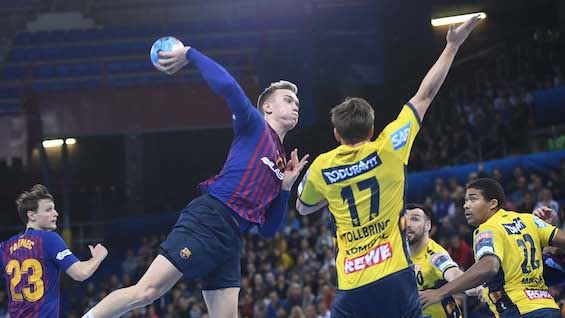 The visitors seemed to come back into the game, but that was temporary, as Barça remained unstoppable offensively. Another goal from Møller gave them an eight-goal advantage again right before half-time (20:12).

Barça coach Xavi Pascual used the opportunity to open his bench during the second half, but his team showed no intention of slowing down. Though Jannik Kohlbacher proved to be very efficient for Rhein-Neckar, his team lacked the defensive stops that could allow them to hope for a comeback.

The advantage never slipped below the final result of five goals.

“They were always in the game. It’s always very difficult to play against them,” said Barça coach Pascual. “We were playing a game where the points aren’t important for us, but I think we showed our honesty. We started focused on winning the game for our fans and for respect to the competition. I’m very happy with my players.”

The visitors had the best start of the game, with French centre back Kentin Mahe scoring four of the opening six goals for his team to offer Veszprém the first advantage after seven minutes (6:3).

Though Polish side took a couple of minutes to warm up, when they found their rhythm, they were unstoppable offensively. Line player Artsem Karalek was easily found by his teammates, scoring five goals in the first half alone. The home side levelled the score in the 17ththanks to Luka Cindric’s first goal, before setting sail in the second part of the first half.

Veszprém’s defenders could not stop their opponents, conceding 21 goals in the first 30 minutes. At half-time, Kielce were leading by three, 21:18.

The attacking festival carried throughout the second half, with the teams exchanging goals as they remained neck-and-neck for most of the period. Petar Nenadic and Mahe were the most prolific scorers for Veszprém, creating the opportunity for their team to come back on the scoring board.

As the game headed to a close end, Veszprém did not allow any goals for five minutes and scored five in the meantime. Manuel Strlek added the winning goal on the wing before Arpad Sterbik stopped Luka Cindric’s final attempt.

“That was a game against a very important person for me: Talant was my coach in my best years as a player,” said Veszprém coach David Davis. “It was a very tough match with lots of ups and downs. We wanted to finish second in the group and we did, so we are very happy about it.”