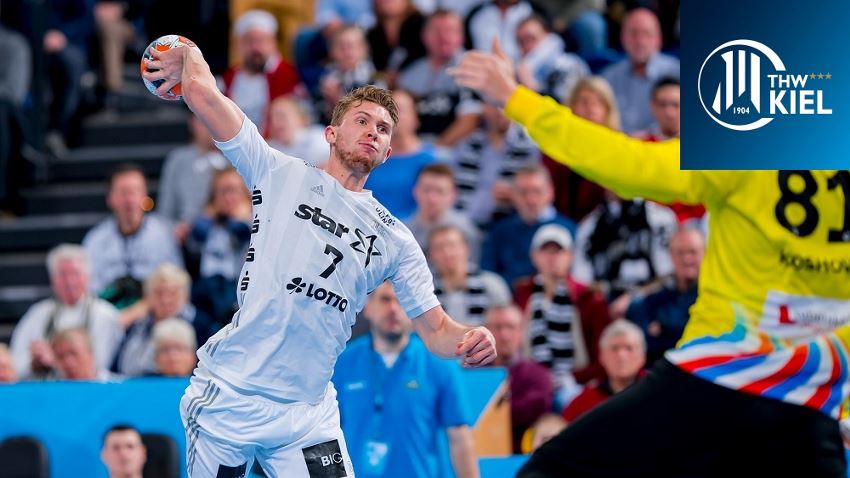 Having played in the EHF Champions League year after year, it was hard for THW Kiel to take on the challenge and play in the EHF Cup last season. But in the end, 2018/19 was a perfect international season for THW Kiel with 10 victories from 10 matches.

Though goalkeeper Andreas Wolff left to Kielce, the squad is not weaker than before - proved by friendly wins over Barça and PSG and a very unlucky penalty shoot-out defeat against Flensburg in the German Super Cup. New coach Filip Jicha and the whole city of Kiel are now eager to end the wait for a ticket to Cologne - and the first Bundesliga title since 2015.

Three questions before the new season

- Which impact will the new arrivals have?

After a constant transition in the past three seasons, the THW squad has not changed that much this time. The biggest transfer ahead of the 2019/20 season was already announced in October 2017: Kielce’s signing of goalkeeper Andreas Wolff. He has been replaced by Dario Quenstedt from SC Magdeburg, who will be back-up for undisputed No. 1 Niklas Landin. The second new arrival has an even clearer job description: Czech international Pavel Horak, who arrived from Meshkov Brest, shall add more concrete to the already solid THW defence. Only in one year’s time, Kiel’s biggest signing since years will arrive, Norwegian world star Sander Sagosen from PSG.

Maybe yes, maybe no, small things will decide. The last three seasons no German team qualified for the pinnacle event of European club handball. So Kiel remain the last team to make it there, in 2016. Twice they failed in the quarter-final. In their Group B, Veszprém and Kielce seem to be on an equal level with Kiel, maybe Vardar too. The problem for Kiel could rather be the long trips than the matches itself. “We have to be ready right from the start. The base for a trip to Cologne is built by a successful group phase,” says club director Viktor Szilagyi. Kiel will need some luck and have to hope that the batteries of the core players will not be empty by the time of the quarter-finals, after EHF EURO 2020 and the Olympic qualification tournaments.

- Did the one-year Champions League absence have any negative impact on the spectator interest?

In contrast: more than 7,000 combined tickets for all VELUX EHF Champions League Group Phase home matches have already been sold. After an average of almost 9,000 fans at their EHF Cup home matches in the previous season, this number will also be realistic for the first part of their EHF Champions League campaign. As all Bundesliga matches will be sold-out mostly with season tickets, the Champions League is the chance for other fans to watch THW. Another proof of the hunger for international games: 8,904 fans attended the match against Paris in the Sparkassenarena, a European record for a friendly game.

Under the spotlight: Filip Jicha

In 2019, there are no bigger shoes to fill than those of Alfred Gislason in Kiel. After 11 years and more than 20 trophies, the Icelandic coach ended his career in Kiel, while his former assistant is the new boss: Filip Jicha. The Czech, who played many years in Kiel, has started in his first head coach position. “I have huge respect for this job and the club, but I am confident that I can manage it,” Jicha said. Players are praising him: “He is acting like a highly experienced coach, simply perfect,” said team captain Patrick Wiencek. With Christian Sprenger as assistant coach and Mattias Andersson as goalkeeper coach, Jicha has two former THW stars in his staff.

In Kiel, it is always about winning trophies - and it hurts that the German record champions did not make it on top of the Bundesliga for the last four seasons, left behind twice by both Löwen and Flensburg. Apart from winning the Bundesliga again, the main goal is to make it to Cologne, as director Szilagyi underlines: „We want to be ready in all competitions when the final decisions are taken. The width of our squad is good enough for making it to Cologne.”

From 1993 to 2019, THW Kiel has been coached by just two coaches: Noka Serdarusic (1993-2008) and Alfred Gislason. Serdarusic steered Kiel to their first EHF Champions League trophy in 2007 and the finals in 2008, while Gislason (Champions League winner as coach of Magdeburg in 2002) increased the number of trophies (2010 and 2012) and finals (2009, 2014). He was the first coach in EHF Champions League history to win the trophy with two different clubs. Now Jicha has taken over, while Gislason retired from any club handball activities.

In 21 EHF Champions League participations so far, Kiel made it to the quarter-finals or better 19 times. From 2000 to 2018 they were always among the top eight of the competition. Six times they qualified for the VELUX EHF FINAL4.