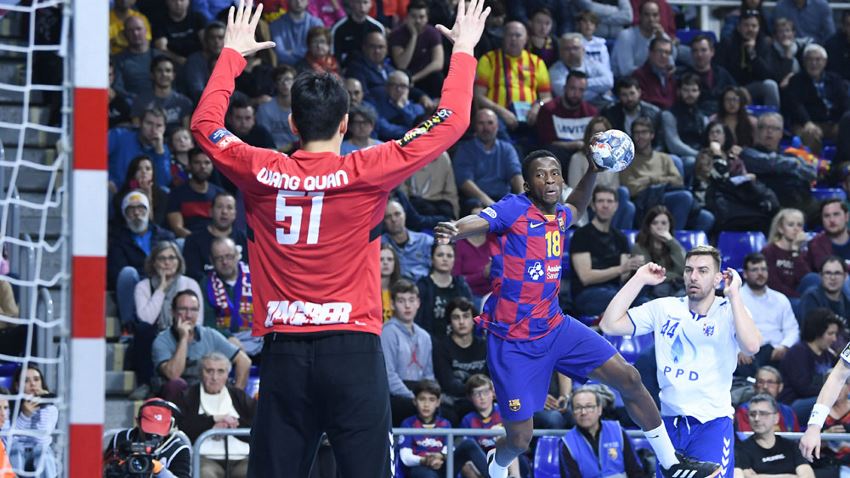 In order to welcome them and their club, Flensburg, Elverum decided to move the game to Lillehammer, where their match against Paris Saint-Germain broke the attendance record for a handball game in Norway back in October. The move played more into the visitors' hands than the hosts', with Flensburg cruising to a comfortable 34:28 win.

Meanwhile Barça took another easy win against Zagreb to maintain their hold at the top of the group, now with 11 wins from 12 matches.

The return to their motherland was obviously a date that Flensburg’s Norwegian players had marked on the calendar – especially Goeran Johannessen, as the centre back scored five goals in the first half alone.

And with a player on such form, the German club dominated much of the first half, breaking away on the scoreboard with a four-goal advantage five minutes before the break.

But all their efforts were ruined in just two minutes when Elverum converted two fast breaks by Endre Langas and Sigvaldi Gudjonsson to come back within one goal at the break (15:14).

If Flensburg had failed to take a clear lead in the first half, they did not let their chance go after half-time. Conceding only two goals between minutes 35 and 48, the visitors took a decisive upper hand in the game.

The German defence was impressive, but so were their fast breaks. Magnus Joendal and Marius Steinhauser were particularly strong as the gap increased on the score board.

The 10-goal mark was crossed at the 50th minute, when Elverum’s defence looked shattered.

Nevertheless, the hosts did their best to please the Lillehammer crowd and were only six goals short at the final siren, but Flensburg still managed to take the two points with a 34:28 victory.

The first leg of the confrontation, back in October, had been decided very early on, and the return match followed the same pattern. Especially as, after five minutes, Barça were already leading 5:0, making the most of their fast break opportunities.

Although Barça were clearly in control, the game was still notable. Zagreb's right back Xueyan Yao became the first-ever Chinese player to step on to a Champions League court when he entered the match late in the first half. His compatriot, goalkeeper Wang Quan, also made his Champions League debut in the second half, saving a shot by Victor Tomas to start off on the right footing.

Meanwhile Barça's Danish left wing Casper Mortensen was also back on court for the first time in a year after injury, scoring right before the break.

At half-time, Zagreb were down by eight goals (9:17), but giving a good impression, fighting for every ball and trying to remain within the game.

The visitors kept this state of mind throughout the second half, but this was not enough to allow Zagreb to come back into the game. Barça were, for the first time, ahead by 10 at the 47th minute. The advantage went up to 12 goals before Zagreb, in a last-minute push, came back within nine at the final buzzer (32:23).