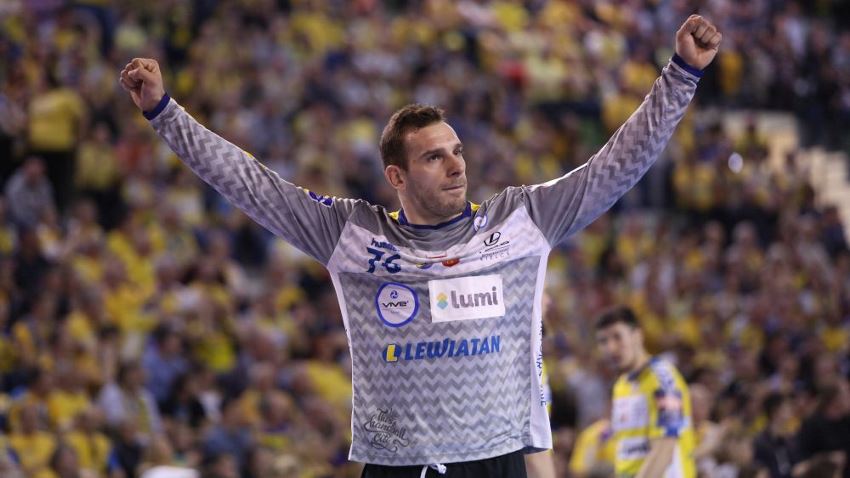 Last week in Zaporozhye, HC Motor Zaporozhye gave PGE Vive Kielce a tough fight, with the match ending in a 33:33 draw. But on home court in the second leg, the Polish champions were stronger – and a 34:29 win secured them a VELUX EHF Champions League Quarter-final berth.

The 2015/16 VELUX EHF Champions League winners from Kielce started the match strongly. Two back court goals from Uladzislau Kulesh set the tone, and the home side went on to lead 5:2 after eight minutes and increased their lead to 10:6 midway through the first half.

Zaporozhye’s coach Mykola Stepanets opted to play with an extra attacking player which bore fruit as the visitors slashed the gap to 13:12 in the 26th minute. However, Kielce’s 4:0 run helped them to build a comfortable five-goal advantage at the break. Notably, goalkeeper Vladimir Cupara had an impact, scoring from his own half into an empty net.

Not today! 🛑🙅‍♂️ Cupara makes a big save on a penalty to help @kielcehandball stay in control in the first #veluxehfcl Last 16 clash of the day pic.twitter.com/DvfkiguX6p


Artem Kozakevych, the first leg’s top scorer with nine goals, spent the first half in Kielce on the bench. But early in the second half, he scored four goals in five minutes, helping Zaporozhye to reduce the gap to 19:17.

However, that only made the hosts respond, and they increased the pressure to take a six-goal lead (26:20) in the 43rd minute. Yet Motor did not give up, and a string of fine saves by Victor Kireev kept them in the game.

At 29:26 six minutes from time, the Ukrainian side still hoped to turn the game around. However, Kielce had a strong finish and ultimately clinched a quarter-final ticket with a 34:29 win.

Mateusz Kus, Motor Zaporozhye line player, said: "When we played seven against six, we lost some goals scored by Kielce in an empty goal, and that was one of the reasons for our failure. Kielce won because they were a better team; they deserved it."

Alex Dujshebaev, PGE Vive Kielce right back, said: "We made some mistakes but (we) also (did) many good things in the game. Cupara saved some important shots, thus we could score a few easy goals on the fast break."