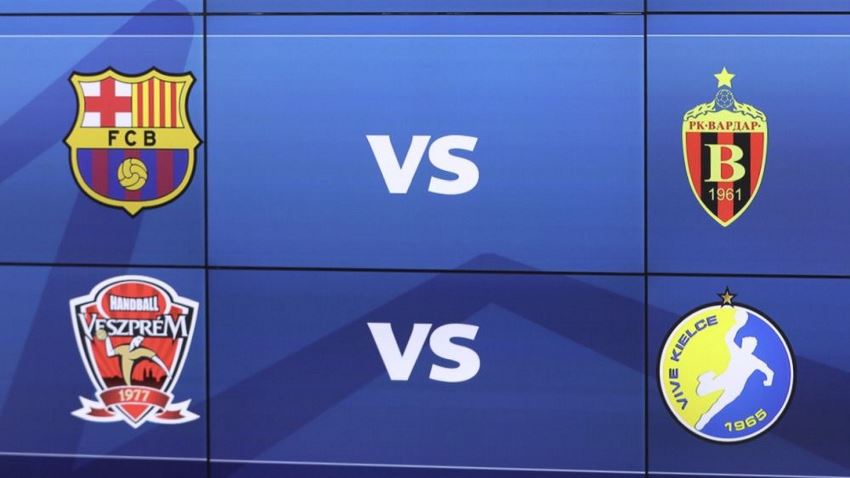 The record winners of the European handball top flight, Barça Lassa, take on HC Vardar while Telekom Veszprém HC meet PGE Vive Kielce as the four best teams of the season descend upon the LANXESS arena in Cologne in the quest for the anniversary 10th winners’ trophy of the VELUX EHF FINAL4 on 1 and 2 June.

Michael Wiederer, EHF President, and Henriette Reker, Lord Mayor of the City of Cologne, conducted the draw of the semi-final pairings in the Palais Flora in the hosting city of the tournament on Tuesday.

The official playing times for the 2019 edition of the VELUX EHF FINAL4 have been confirmed. The matches will be played as in previous years at 15:15 and 18:00 hrs on both Saturday and Sunday. The playing order of the semi-final matches has also been confirmed following Tuesday's draw:

All four teams at the VELUX EHF FINAL4 2019 have played together this season in the same group, hence they know each other very well.

“This does not make too much difference as we know them as much as they know us. We lost twice against them in the group phase but in Cologne it is different,” said Vardar captain Stojanche Stoilov, who raised the trophy with his team in 2017 after they had beaten Barcelona in the semi-final.

This was just one of their two victories over the Catalan giants in 14 direct encounters in the EHF Champions League.

“If I could I would have chosen none of these three teams for our semi-final opponents – including Vardar. They are all great squads and it will be a very interesting EHF FINAL4 this year. Vardar are extremely dangerous and their current situation makes them even more dangerous as it will be all about pride for them,” warned Victor Tomas, right wing of Barça Lassa, who are eyeing already their ninth EHF Champions League trophy.

Also, in the second pairing, the head-to-heads speak clearly in favour of one team as Veszprém beat Kielce on eight out of 11 occasions in the European elite competition.

However, the greatest comeback of the VELUX EHF FINAL4 history from 2016 from three years ago is still fresh in minds of handball fans. Kielce were down by nine goals deep in the second half of the final only to win the trophy in the penalty shootout eventually.

“They were missing a lot of players throughout this season, but once all their players are healthy again, they will stand for a fantastic team,” Veszprém playmaker Mate Lekai said. “We have already finished fourth, third and second at this tournament, but now the time has come to get the first place,” he added.

Blaz Janc, the Kielce right wing, also expects a thrilling semi-final clash. “Veszprém are very strong but we will try our best to beat them. We showed in the quarter-finals against PSG that we can win over a great team.”

A feast of handball

As the VELUX EHF FINAL4 approaches its 10th edition, the opening party has become an integral part of this feast of handball. Each year, handball fans have been celebrating the culmination of the season outside LANXESS arena throughout the evening.

This year, German brass-pop formation Querbeat will be rocking the party again, so be sure to get your tickets for the VELUX EHF FINAL4 Opening Party.

The programme of events centred around the open-air stage begins at 18:00 local time and will include Querbeat’s performance, a presentation of the four teams, a chance to meet your favourite handball stars, and much more.

Fan integration in the opening shows

To pay the tribute and honour the spectators’ support, fans can actively play a role in the Opening Shows. Besides using pictures from our 10 fingers for 10 years campaign, fans have the possibility to record a short clip in the Entertainment green box during the Opening Party on Friday. The clips will then be shown at the Opening Show for the 3/4 placement match on Sunday.