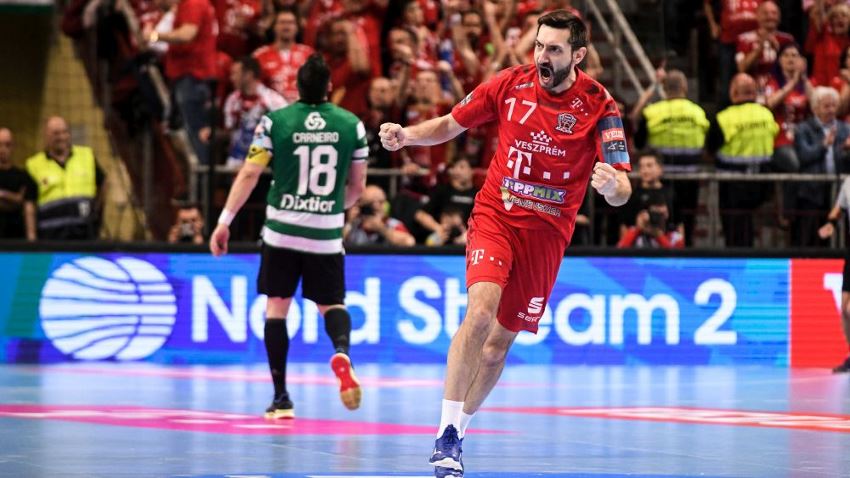 In the first leg of their VELUX EHF Champions League Last 16 tie in Lisbon, Veszprém needed 53 minutes to lead for the first time in the game – and they eventually won 30:28. However, on home court, Veszprém did not give the Portuguese club any chance and advanced to the next stage, courtesy of an excellent team performance, winning the second leg 35:29.

Both teams’ goalkeepers began the match with great saves in Veszprém’s arena, which again had a great atmosphere.

After 15 minutes, the Hungarian team assumed control of the match and after three quick fast break goals, the away club’s coach had to call a timeout, with Veszprém leading 7:4.

Nine players from Veszprém scored in the first half, helping them to build up a three-goal lead at the end of the first half. After 30 minutes, David Davis’ squad had a superb 74% shot efficiency, while Sporting’s sat at a vastly inferior 54%.

Although the break helped Sporting to regroup, with the Portuguese side drawing level at 17:17 after 36 minutes, the Hungarian record champions responded to the challenge.

As the distance only grew between the sides, with Veszprém extending their lead to 28:22 in the 49th minute, it was known long before the end of the match that Sporting’s dreams were over and that the hosts will advance.

Laszlo Nagy and his teammates will meet the winner of the tie between Meshkov Brest and SG Flensburg-Handewitt.

David Davis, Veszprém coach, said: "This game was complicated just like in Lisbon. Everybody was focused and we could correct the mistakes in attack and defence. When the team is this focused, we are really strong. Sporting was a tough opponent at home and in away as well. Our players were amazing."

Hugo Canela, Sporting CP coach, said: "Veszprém took advantage of all our mistakes. Veszprém is the most difficult team to score against in organised attack. This has been a hell of a ride. We can be proud about arriving here."