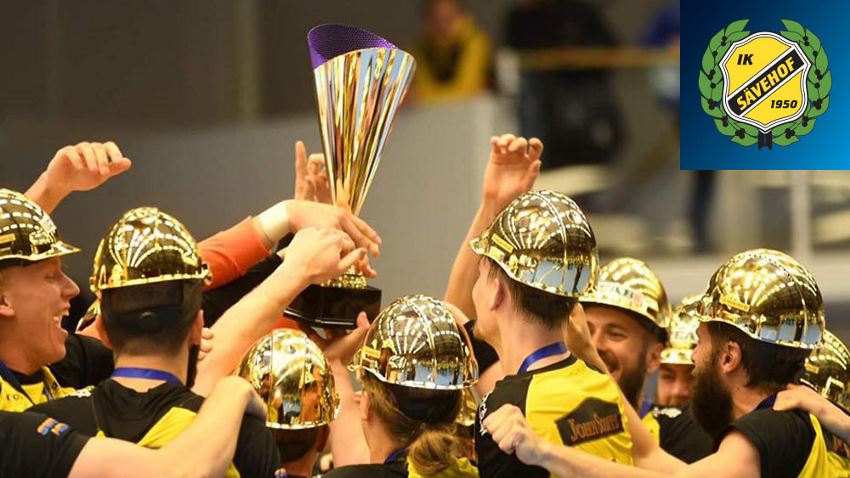 IK Sävehof won three straight Swedish championships from 2010 to 2012 and had a few good seasons in the VELUX Champions League. Now, for the first time in seven years, Sävehof is back in Europe’s finest club competition.

After surprising everyone in Sweden last season this young team has the chance to do something great in Europe.

However, exactly one week before Sävehof were scheduled to open the VELUX EHF Champions League season with a match at Cocks, playing coach Jonas Larholm suddenly left the club for personal reasons, with a trio of coaches - Kristian Berndtsson, Emil Berggren and Peter Möller - taking over for the 2019/20 season. Michael Apelgren has already been appointed as new head coach for 2020/21.

- Can the new coaching trio get this young team to perform?

When Jonas Larholm returned to Sävehof in 2016 it was as a player, but in a young squad the experienced Larholm had a lot to teach and in the 2018/19 season he basically acted as an assistant coach. He was set to be playing head coach for 2019/20, but left the job seven days before their VELUX EHF Champions League opener against Cocks. A trio of Emil Berggren, who is also the team manager, Kristian Berndtsson, and Peter Möller will now guide the team. “We want to win as many games as possible, but also to gain as much experience as possible for our young squad. Since we have a young and talented team, the experience will be extremely valuable,” Berggren says.

- How much will IK Sävehof miss Joakim Larsson and his experience?

After nine seasons with three different German teams (TV Grosswallstadt, VfL Gummersbach and GWD Minden) the line player returned to Sweden before the 2017/18 season. Since then Larsson played a big role in Sävehof but after the great success last season the club and the 35 year old decided not to continue working together. In this very young team (only two players are over 25 years old) Larsson’s experience will be missed. In his absence Sävehof has brought in Adam Blanche, a huge talent and a great player, but only 19 years old and with one season as a senior player.

- Who will lead this team on the floor?

Others have to step up after Jonas Larholm left. Eck Aga and Christoffer Brännberger had huge roles in last season’s success and team captain Jonathan Edvardsson is also key. “Playing in the VELUX Champions League means that we are in the top of our national league, and that’s where we want to be. And since we have a young team it’s very good experience for us,” Edvardsson says.

Under the spotlight: Gzim Salihi

The right back had a great season last year and has everything in his tool box to be a great international player. At the end of last season the 20-year-old made his national senior debut for Sweden in two games against Japan. Salihi will be a huge focus point for Sävehof in their attacking play.

IK Sävehof believe that they have a chance to make it past the group phase. ”We have a tough group where I think all of the teams can go through,” coach and team manager Berggren says. And team captain Jonathan Edvardsson agrees: ”The group looks very even,” he says.

There are six homegrown players at IK Sävehof. This year Gustaf Wedberg, Simon Möller, William Bogojevic, Jonathan Edvardsson and Sebastian Karlsson will be joined by youth player Emil Berlin. Jonas Larholm was also a player who started his career at Sävehof.