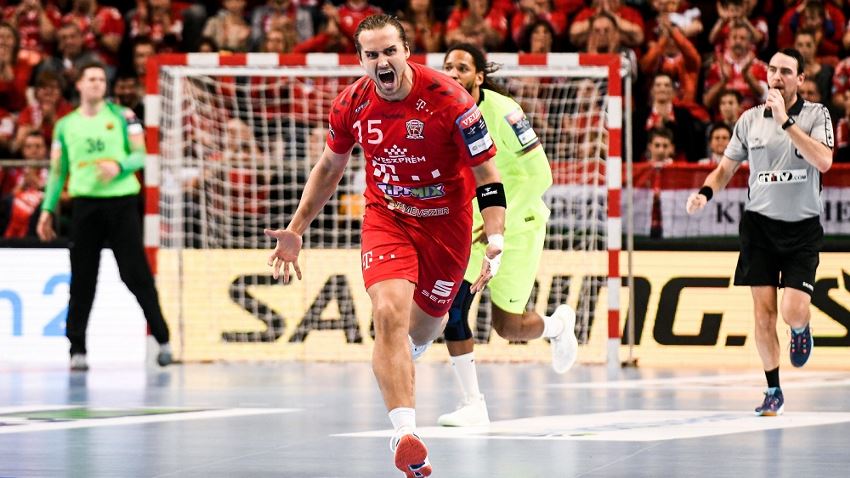 Xavi Pascual’s 10th anniversary as Barça Lassa coach was spoilt by Veszprém, which dominated throughout the game and earned a 29:26 win to stopping the Spanish side’s nine-game winning streak in the VELUX EHF Champions League.

Title holders Montpellier won their second game in the group phase and are now on par for a Last 16 berth. However, there is no room for mistakes with Kristiansand and Brest still in the mix.

It was an emotional afternoon in Veszprém on Saturday, a day after the 10-year commemoration of the tragic passing of Romanian line player Marian Cozma. A moment of silence was observed before throw-off, with the fans remembering Cozma, whose statue is still standing tall in front of the Veszprém Arena.

But it was business as usual for Barça, who were gunning for their 10th win in a row, regardless of their injury woes, as Aron Palmarsson, Casper Mortensen and Cedric Sorhaindo were out of contention.

Barça usually start strong and force their opponents to come from behind, but Veszprém were having none of it, especially knowing about the Spanish side’s injury woes. 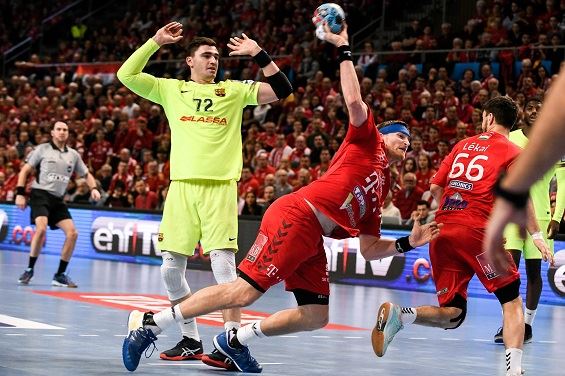 A 7:3 run was the pivotal phase of the first half, with Veszprém looking comfortable in a 13:10 lead. Yet a furious comeback from the Spanish side, fueled by Jure Dolenec and Aitor Arino, brought a deadlock as the first half ended, 15:15.

It took Barça astonishing six-and-a-half minutes to score their first goal of the second half and by that time the hosts were already three goals up again (18:15), with French playmaker Kentin Mahe dictating the rhythm of play.

Veszprém coach David Davis took an early time-out, but it did not help build the lead back immediately. Yet Barça were surely a different team, as they could not help their coach, Xavi Pascual, enjoy his 10th anniversary on the Spanish powerhouse’s bench. It was only Pascual’s 42nd defeat in 559 matches in charge of the team.

Veszprém duly played as a team and closed out a hard-fought game, 29:26, to stop Barça’s nine-game winning streak.

The Hungarian side will now face Vardar in a do-or-die clash for the second place, while the leaders host Kristiansand and could secure their first place next week.

David Davis, Veszprém coach: “The first half some mistakes were made, but we were equal. I think we could win at the end because we had more saves in the second half.” (About Petar Nenadic:) “I asked him to play left back after the World Championship and he was up for the challenge. He was a key player today.”

Petar Nenadic, Veszprém centre/left back: “Not so many teams can win against Barcelona. Every Champions League game is difficult especially after the World Championship. I have many friends in Barcelona and Xavi Pascual was my coach. I wish them good health and I hope we will meet in Cologne.”

Xavi Pascual, Barça coach: “I think they played well from the start. It was the same in the second half, we made mistakes from clear shots. I am happy with the performance of my goalkeeper.”

Kevin Møller, Barça goalkeeper: “It was a good game that could have gone either way. We needed a bit more luck. Veszprém played very well today and also the atmosphere was fantastic.”

There was literally no room for mistake for title holders Montpellier, whose injury woes and fluctuant form have sunk them rock bottom.

Facing a team that failed to win for the past eight rounds, the do-or-die feeling about the clash for the hosts was real, but the start was another subpar performance from last season’s surprise package.

Right wing Maksim Baranau scored three times in a row for Brest, as the guests kept the score tied in the first 15 minutes, but Brest’s attack failed to build upon their good start.

Back Melvyn Richardson and line player Fredric Pettersson combined for six goals, as Montpellier took upon them to force Brest’s mistakes.

A 15:11 lead at the break handed a lifeline to the French side, which looked determined to be back in contention for a Last 16 berth, as the win helped them tie the Belarussian side at five points. 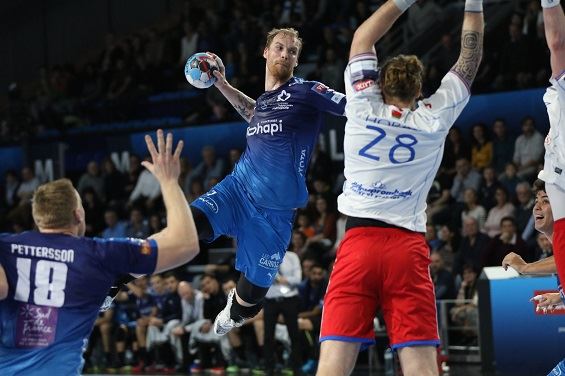 As Richardson continued his run of goals, Brest fought back and forth to challenge for at least a draw, getting help from Serbian sharpshooter Petar Djordjic.

An unexpected Montpellier rut helped Brest back into the game, 18:18. But Richardson breathed in new life into Montpellier, as a 4:1 run was decisive to bring the French side their second win in the group phase.

With defensive specialist Vid Poteko out due to his third suspension, Brest could not cope with Montpellier’s attack, as the French side closed the game with an impressive 29:23 win.

Montpellier and Brest are now level in seventh place, but the French side holds the tiebreaker with the six-goal win. Brest are on a 10-game winless streak, with their season on the line next week against Rhein-Neckar Löwen.

Patrice Canayer, Montpellier coach: “We had two targets today: to win the match, and to put in a better performance than what we produced in the first part of the season. Our attitude and performance were up to the standards you expect in the Champions League. We dominated the match, even if we had a few low points.”

Melvyn Richardson, Montpellier right back: “It was important for us to show a reaction after the start of the season, and this win allows us to continue to hope to go through to the next round. We showed a lot of intensity in defence and we found solutions when attacking.”

Manuel Cadenas, Meshkov Brest coach: “Montpellier deserved to win tonight. At the end of the match Vincent Gerard made some good saves. We weren’t good enough in attack to hope to get anything out of this match.”

Sime Ivic, Meshkov Brest right back: “They scored a lot of easy goals. We lacked energy and concentration towards the end of the match, and over the 60 minutes we couldn’t match Montpellier’s performance.”

Kristianstad could have jumped into the crucial sixth place in Group A, but were edged by Kielce, which are still in the hunt for second place.

Regardless of the injuries from Daniel Dujshebaev and Luka Cindric, the Polish side was a class act and they threw off in style, riding veteran’s Michal Jurecki fine form to a 7:4 lead after 11 minutes.

A fighting Swedish side came back and took an 11:10 lead, with right wing Anton Halen leading the way. But Kielce has tied the game again at the break, 15:15. 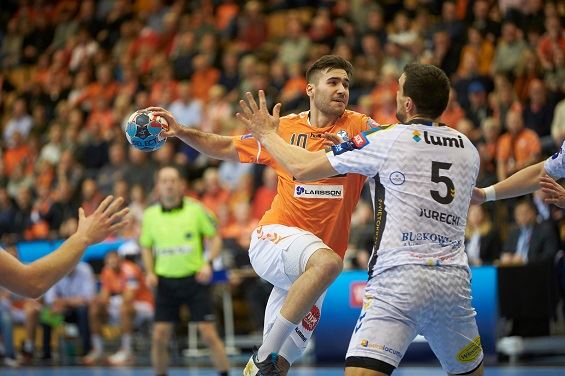 An unexpected off-night from Alex Dujshebaev meant that other Kielce players had to step up, with wing Blaz Janc and line player Uladzislau Kulesh taking control.

A 3:0 Kielce run looked to settle the game, but an outburst from Norwegian back Stin Tore Nielsen brought back the hosts into the game, 29:29.

However, Kielce’s experience prevailed, with Jurecki closing his superb game with a pair of goals to hand the Polish side another win.

Kielce are tied with Veszprém at 14 points and will host Montpellier next week, while the Swedish side will likely take out their battle for the sixth place with Brest and Montpellier until the final round. The three teams are tied at five points.

Talant Dujshebaev, Kielce head coach: “At the end we were a little bit luckier than them. In the last five minutes we had three, four rebounds that went our way. We can also thank Filip Ivic for his important saves.”

Filip Ivic, Kielce goalkeeper: “It was a great atmosphere here in the arena. My team fought hard and long and made it possible for me to make the saves I made.”

Lars Olsson, IFK Kristianstad assistant coach: “We knew that we could beat them and make a good game here. Unfortunately Filip Ivic played very well and made some important saves at the end. I’m very proud of our players’ performance.”

Helge Freiman, IFK Kristianstad centre back: “It was a hard game, but I think we showed ourselves that we can match any team if we play with the attitude that we played with today. It’s a couple of small things that make that we don’t get the two points today - the biggest of them was Filip Ivic.”