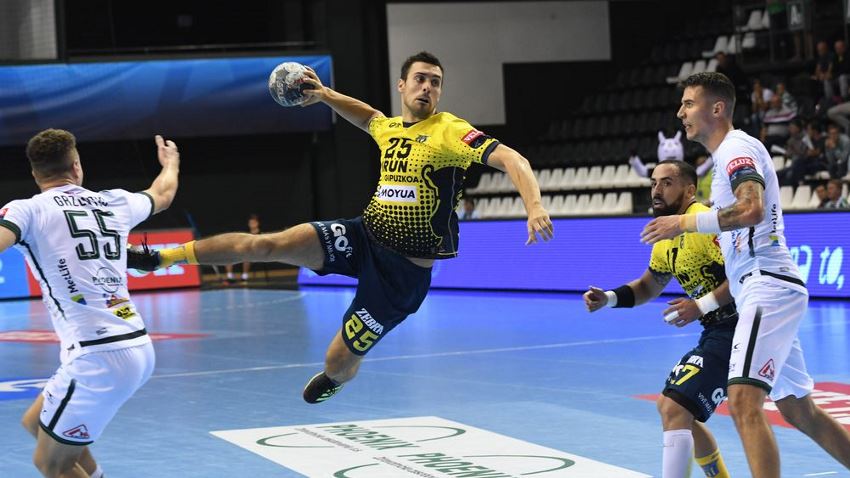 The VELUX EHF Champions League is back and with it the weekly social media review, a place where fans can connect with the best of the competition's posts on Facebook, Instagram or Twitter to find out the latest news, the buzz or which crazy ideas the best handball teams in Europe had over the past seven days.

This week, we will find out who is PSG’s Superman, how long did it take for Brest to reach Porto and there is also a hint about the DELO WOMEN’S EHF Champions League, which will throw off in three weeks’ time.

If you were a fan of the social media review last season, you already know that you could gain access into PSG’s secrets via their “No comment” weekly update. Let’s see once again what the French champions are up to, after their scintillating 37:29 win in the first round against HC PPD Zagreb.

New season, new gifs and a Superman A new season brought new players and new gifs for the French powerhouse. Let’s enjoy Vincent Gerard lighting a fire under Rodrigo Coralles, while Sander Sagosen is PSG’s Superman. A 37-goal outing against Zagreb meant that a lot of the new animations were used by the French champions.

A foray into life with Szeged

MOL-Pick Szeged are also a team that boasts a weekly video show and they came back with a bang. From a short foray into coach Juan Carlos Pastor’s life in Hungary to Roland Mikler’s new role as a dad, the Hungarian outfit delivered this week. As they did on the court, where Szeged enjoyed a superb 31:28 win against Barça

Budapest is one of Europe’s most beautiful capitals and the landmark of the DELO WOMEN’S EHF FINAL4. With Szeged being only a two-hour drive from Budapest, Barça landed in Hungary’s capital before the game against Szeged, which they lost, 31:28, and decided to time lapse the landing on the airport.

A long trip for Brest

Travelling can get extremely complicated, with players needing their rest to perform at the highest level. It was the case with Meshkov Brest this time, as they 5,556 kilometers on their way to Porto and back to Belarus. A train to Warsaw, followed by two planes to Frankfurt and Porto were the stages of Brest’s trip, which ultimately ended in a 27:25 loss against the Portuguese champions.

Elverum celebrated the start of their first season in groups A/B of the VELUX EHF Champions League with a feel-good video of their antics from the previous season, complete with some dramatic conclusions to big matches. The emotion was there, but they failed to replicate it in front of their own fans in round 1, losing 34:24 against Aalborg.

Today we are back in EHF Champions League! Let's make some magic moments together!

A new ball for Veszprém

It is a tradition for Telekom Veszprém to celebrate handball by all means possible and this year makes no difference. A wooden ball is always brought into their arena and the opponents aére signing it when they play. This time, it was Motor Zaporozhye who donned the first signings, before losing against the Hungarian powerhouse, 40:28.

Leaving after eight seasons as a staple of one of the powerhouses of European handball can bring even a 2,01m giant to tears. It happened with Marko Vujin, the 34-year old right back, who left THW Kiel this summer for Sporting CP.

The Serbian sharpshooter was celebrated in the Sparkassen Arena before the game against Flensburg in the Bundesliga, with some serious emotions coming from his former teammates, including captain Domagoj Duvnjak. Vujin scored 481 goals for the German side in seven seasons in the VELUX EHF Champions League.

Ladies and gentleman, this is how you really present a winning team in style. Back in the VELUX EHF Champions League after 23 years away, Bidasoa Irun really understood what fighting spirit meant and threw off the season in style, with a 25:23 win away to TATRAN Presov.

A call for handball

There are still three weeks before the start of the DELO WOMEN’S EHF Champions League, but teams are already at full strength, as they started their domestic leagues. There is a tradition for CSM Bucuresti to give back to the local community and all the team’s stars, including Romanian stalwart Cristina Neagu, welcomed the students in the first day of school. Neagu called for the parents to steer the children to handball, as more than 1,000 kids are already playing in CSM’s youth teams.