The drama and excitement seen already across this season’s EHF Champions League has boosted the number of matches broadcast live by TV partners, according to figures announced by EHF Marketing GmbH.

In the VELUX EHF Champions League, the number of TV partners showing top-flight handball has increased by 50 per cent in the last two seasons. On average, 15 of the 42 TV partners are broadcasting each match live around the world so far this season.

The most popular game so far this season came in round 5 when the clash between Barça (ESP) and Paris Saint German Handball (FRA) was shown live by an impressive 29 of the broadcast partners on 19 October. 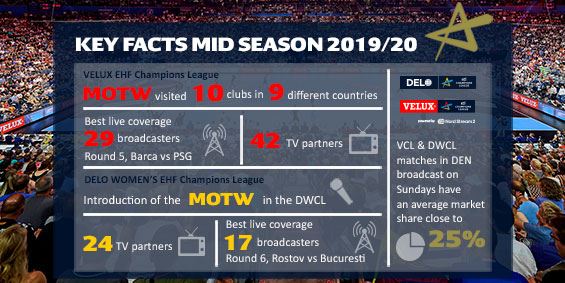 In the DELO WOMEN’S EHF Champions League, the average number of TV partners showing matches has doubled in the last two seasons with, on average, more than 10 partners broadcasting live games.

It was the match between Rostov-Don (RUS) and CSM Bucuresti (ROU) during round 6 on 16 November that the TV partners really wanted to show, with the game screened by 17 of the 24 partners who are broadcasting competition live throughout the 2019/20 season.

Nordic numbers on the up

EHF Champions League matches have also proven to be a huge hit in Scandinavia. The games featuring Danish teams that were broadcast on Sundays in Denmark, co-hosts of the Women’s EHF EURO 2020 next year, have enjoyed an average market share close to 25 per cent.

Meanwhile in Sweden, IK Sävehof were the first club to organise a double-header of action to incorporate both their men’s and women’s teams playing EHF Champions League matches in the same hall on the same day.

Miguel Mateo, Head of TV & Media of EHF Marketing, said: “We are not only delighted with the positive figures but also how both competitions are growing in their coverage.

“We believe the spectacle of the matches on the court and the atmosphere in the arena, mixed with the high quality production and additional behind-the-scenes content are clearly having an impact on why our partners are deciding to show more and more matches.

“However, this is just the start – we are working hard to ensure we bring the best club handball action to an even wider audience with rich, engaging and high-quality content when the thrilling knockout rounds begin next year.”

All eyes on Match of the Week

The interest in both competitions has been also reflected in the MOTW (Match of the Week). During the first 10 rounds of the VELUX EHF Champions League 10 clubs from nine different countries were visited, enabling handball fans throughout Europe to enjoy the very best of the digital and TV coverage from their hometown.

This season has also seen the DELO WOMEN’S EHF Champions League implement MOTW coverage. Former German international Anja Althaus has travelled to games to be courtsidefor several group stage matches to be the face of the coverage. Anja will continue to visit the league’s biggest arenas between now and the end of the season, supported by the new title sponsor of the competition, the Delo Group.