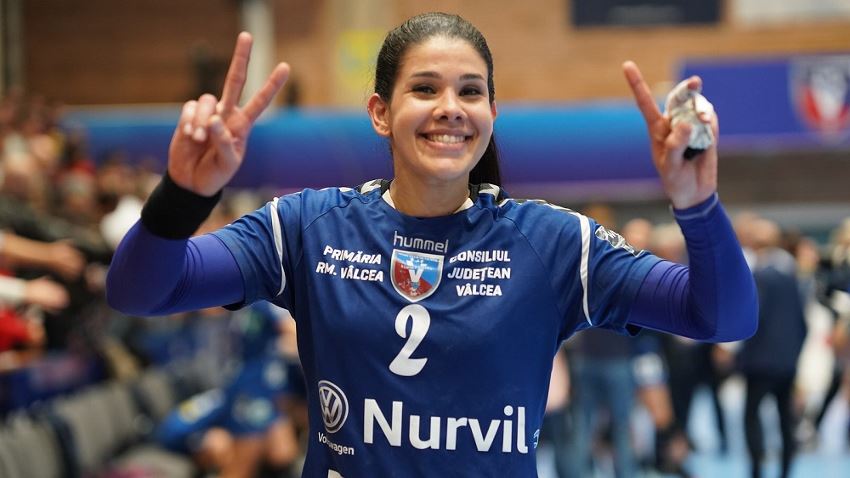 Six talking points include one record, two newbies and a plethora of goals

The DELO WOMEN’S EHF Champions League was back in style this week, with lots of goals, huge surprises, easy wins for the favourites and a miraculous comeback from a player who seemed done for the season.

Are you ready to talk shop? Here are the six talking points after round 1.

Hungry attacks throw off the season in style

Seven teams scored at least 30 goals, as attacks were in full fledge in round 1 of the DELO WOMEN’S EHF Champions League group matches. In fact, 463 goals were scored over the first eight matches of the European premium competition, a new record to throw off the season, for an average of 57.875 goals per game. The previous best mark was 458 goals last season. The trend is on an up, with 420 goals scored on the opening day of 2017/18 and 387 in 2016/17. While the largest number of goals was surprisingly scored in the raucous Moraca Arena, where Buducnost’s defence was torn apart by a sturdy Brest (35:32), Metz threw off the season in style, putting 40 goals past a lagging Podravka defence, only two goals shy of their all-time scoring record. It might not mean much, as the ‘defence wins championships’ mantra is still a go-to phrase for any coach, but season by season, attacks got more sophisticated and coaches found new ways to surprise their opponents. More importantly, fans are now enjoying more and more goals, with a free-flowing style adopted by more and more teams.

Are CSM finally a team?

Much has been said about the lack of cohesion, team spirit and grit and the numerous coaching changes that CSM underwent in recent seasons. The Romanian powerhouse always seemed to create the team around stalwarts rather than improve an ailing team. But handball is a team sport and CSM crumbled under the pressure and the injuries last season, failing to progress to the DELO WOMEN’S EHF FINAL4. There were no signs that the situation was improving this season, with the Romanian side losing two games in the domestic league, while losing Nora Mørk to a devastating knee injury piled on the pressure. Moreover, coach Tomas Ryde decided to quit due to personal reasons only five days before the start of their European season. It looked like a recipe for disaster, a perfect storm. Yet with former assistant Adrian Vasile named as the new coach, CSM finally looked like a team. The spirit was there. Sure, the attack was scrappy and mistakes were made. But every once in a while, CSM fought back, hanged in there by the skin of their teeth and took a convincing 24:22 win against Team Esbjerg, with a superb outing from goalkeeper Denisa Dedu, who saved 17 shots, for an outstanding 44 per cent.

What a moment for #DHKBanikMost! See how the Czech side dramatically clinched their first-ever win in the group matches of the #ehfcl in the closing stages @RKKrim. 😎 pic.twitter.com/eHnu9zXtia

It took six years for Ramnicu Valcea to play once again in the DELO WOMEN’S EHF Champions League, but they came back roaring. The new incarnation of the Romanian side, SCM, took a convincing 34:27 win against SG BBM Bietigheim in front of 3200 fans that sung and cheered for their team for the entire 60 minutes of the game. “I did not see anything like this in my life,” said Kristina Liscevic, the 29-year old Serbian playmaker, who played for 10 different teams in the past 11 seasons. Valcea’s free-flowing attack will surely wreck havoc in the opposing defences and the Romanian champions could be a dark horse this season. However, the most surprising win came on Sunday, when another rookie, DHK Banik Most, took the competition by storm and recorded a historic 31:29 away win against RK Krim Mercator. Krim, a two-time DELO WOMEN’S EHF Champions League winner and a team that played 239 games in the competition, were stunned by a side whose players had zero experience in the European premium tier. The biggest challenge for Most, however, lies ahead, as they host title holders Györ next week.

“This will not happen again”

Conceding 35 goals in a home game will not help a team to succeed, as such a porous defence rarely can be hidden behind a stellar attack. When a team that prides itself on their defence, like Buducnost, is ran over at home, there will surely be question marks over the future. Sure, it might look like an overreaction after only one round, but Brest missed three important players and Buducnost did not concede 35 goals at home since a 40:26 thumping at the hands of Spanish side Mar El Osito L’Eliana in the semi-finals of the 1997-1998 season, 22 years ago. With the core of the team almost intact from last season, Dragan Adzic looks to have a lot on his plate now, but looked upbeat after the game. “This will never happen again,” said Adzic, as Buducnost have a must-win game next weekend against Bietigheim.

Györ, Rostov and Metz topped the power rankings before the start of the season, as the three sides eyed a return to Budapest in the business end of the DELO WOMEN’S EHF Champions League. It was no surprise that all three recorded easy wins in the first round of the group phase, by healthy margins. Györ pummelled Savehof, 35:22, with 11 outfield players scoring at least a goal, Metz put 40 past Podravka, while Rostov had a great defensive outing in their 31:21 win against MKS Perla Lublin. Sure, all the three powerhouses were strong home favourites, but they picked up where they left off and look set for another challenge for a DELO WOMEN’S EHF FINAL 4 berth.

Watch this amazing pass into the line from @Emiliehegh, converted by none other than Heidi Løke for @VipersKrSand.😍 #deloehfcl pic.twitter.com/uScYuAMiXM

Last Wednesday, the Norwegian Handball Federation announced that line player Heidi Løke will miss the World Championships in December due to a knee injury that will sideline Vipers’ player for at least three months. On Saturday, the 36-year-old Norwegian stalwart scored eight times for her new team, in Vipers’ 31:22 win against FTC, leading the line both in attack and in defence. How was that possible? Løke, who never had a serious meniscus or ligament injury during her career, had an MRI after suffering an injury representing her national team in September, which revealed a serious meniscus lesion. However, a second MRI showed that the injury was healed, and the Norwegian line player was good to go. She showed no signs of rust, her trademark smile on her face, as she singlehandedly took advantage of FTC’s woes to hand Vipers a winning start to the competition.