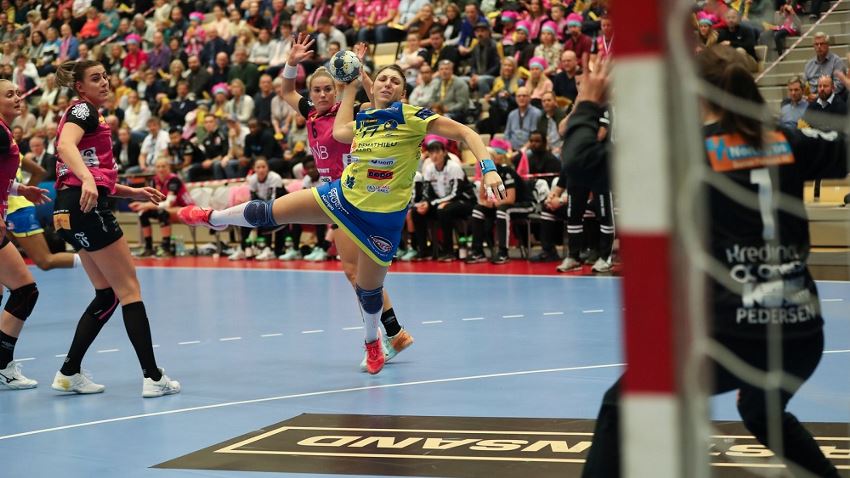 With deciding goals in the final seconds, incredible comebacks and outstanding team spirit on display, this season’s DELO WOMEN’S EHF Champions League has been a joy to behold.

Here are eight matches to look back on which capture the essence of what makes this competition so special.

Brest impressed all and sundry with their perfect group matches, but this performance against Györ would prove they truly belong at this level.

An 8:3 lead for the French side after just 11 minutes left the champions shook. Slowly but surely, they clawed their way back into the contest and when they drew level early in the second half, it seemed destined that Brest would be losing their perfect record.

Brest refused to follow that script, however, and took the lead once again, forcing Györ to scrap and salvage a draw thanks to an Anne Mette Hansen goal in the dying minutes.

Purists in the art of defence should keep on scrolling, this match was not for you. This repeat of last season’s bronze medal match was ding-dong affair with both sides coming out swinging.

Vipers and Metz both enjoyed leads in the first half, before the French champions took control with Grace Zaadi imposing her will in attack and helping her side take an eight-goal advantage.

Vipers displayed their heart and determination in the second half as they staged a remarkable turnaround, completed by Emilie Hegh Arntzen’s penalty in the final minute – the 76th goal in 60 minutes of handball.

A 35-game unbeaten run, spanning more than two years, looked in real danger as Buducnost pushed their guests and traditional rivals Györ to the limit.

Victory would secure top spot in group 2 for the reigning champions, but Buducnost looked like a team possessed as they raced into a 17:12 lead at half-time.

When a Jovanka Radicevic fast break made it a six-goal lead early in the second half, Györ looked in serious danger, but Katarina Bulatovic had other ideas and her eight-goal haul against her former club helped inspire an outstanding comeback victory.

Heading into this clash, the sides were level on points in the race for the quarter-final and with both teams struggling for form, this match seemed certain to make or break their hopes.

Vipers’ defence appeared to be on top for the most part, leading the way to an early four-goal lead, but they simply could not deal with Cristina Neagu.

The Romanian star looked back to her best as she scored seven goals in each half and a 7:1 run in the final eight minutes turned the game on its head and saw CSM Bucuresti snatch the points away from their hosts.

The battle for the top three places in main round group 1 went right down to the wire as Esbjerg and Metz met on the final day. Following a draw in the reverse fixture, another tense encounter was expected and the contenders did not disappoint.

Metz were by far the better of the teams in the first half, using their solid defence to set up easy goals in transition and take a five-goal lead at the break.

Jesper Jensen’s side soon sorted themselves out, however, as Marit Jacobsen and Estavana Polman began to chip away at Metz’s lead. The lead switched hands a number of times late on, before two goals in the final 70 seconds saw Esbjerg snatch a victory which put them into second place in the group.

Level at the top of group B, a draw in their previous clash, two teams full of star attractions – this was always going to be a fun game to witness.

This match deserves the sporting cliché of a game of two halves as the opening 30 minutes well and truly belonged to Rostov-Don. A buzzer-beating goal from Cristina Neagu gave CSM a glimmer of hope as they went into the dressing rooms 14:7 down.

Neagu picked up where she left off, scoring six goals in the second half, which is particularly impressing considering it was only her third match since returning from her ACL injury.

Rostov appeared to be easing to victory, leading 23:17 five minutes from time. A late CSM rally cut the deficit to a single goal, but it was too little, too late and Rostov held on to the two points.

Nobody can accuse Metz of not being value for money this season as they once again pop up with a thrilling encounter.

FTC had endured a stuttering start to the season but knew what victory in Metz tasted like in the past. A blistering start saw the Hungarian club race 6:1 ahead and they managed to hold on to a four-goal lead at the break.

Eventually, Metz’s defence and goalkeeper Ivana Kapitanovic stepped up and kept FTC out for 12 minutes, leaving the game tied with five minutes left on the clock. The teams traded goals in a dramatic final minute and were forced to settle for a share of the spoils.

Although a mere 41 goals were scored, there was no shortage of tension in this back and forth battle in Romania.

Buducnost looked set to run away with a second consecutive win over Valcea as they took an early 4:0 lead, but the hosts took their first lead by the 23rd minute.

Neither side were able to grab a firm hold of the game as momentum swayed back and forth. The two-time champions recaptured the lead with just over a minute left to play, thanks to Majda Mehmedovic, and Valcea were forced to pay the price for missing three penalties.