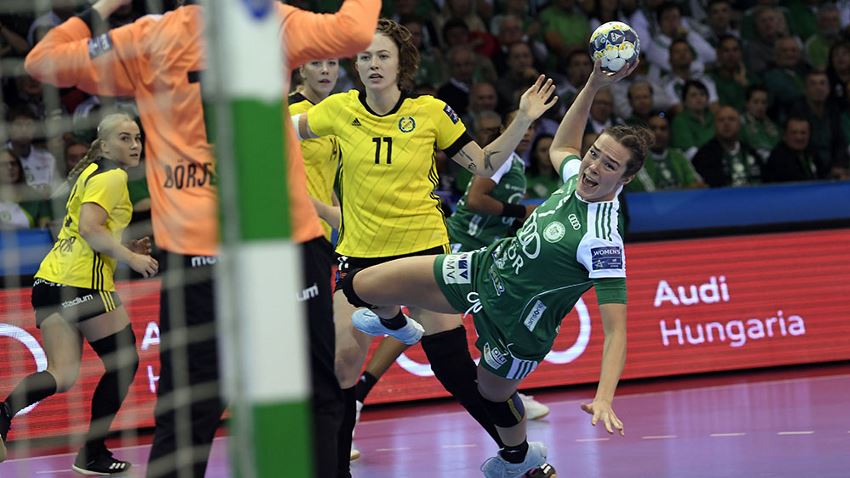 Elsewhere in group D, the clash between the Slovenian veterans and the Czech newcomers brought some of the most exciting moments in the first weekend. To the surprise of many, DHK Banik Most took two points home from Ljubljana.

• in Hungary, five players scored five goals, three players from Györ and two from Sävehof
• with a 12-goal victory, Györ top group A
• Banik Most celebrate their debut in the group matches with an away victory
• Alja Varagic showed a superb performance as she scored eight goals in the first half alone, adding four more in the second half

Györ started the game with an amazing run and it was 5:0 when Sävehof coach Rasmus Overby took his first timeout, which swiftly changed the course of the half.

Sävehof worked their way back into the game and only Eva Kiss could defend Györ’s lead at some critical minutes. Her performance before half-time resulted in a 42 per cent save rate.

The newcomers of the Hungarian team could not help their team, missing their first shots, but Kari Brattset went on to lift Györ, scoring five from five shots in just 18 minutes.

Sävehof went back to the dressing room having to figure out the ’antidote’ against Györ. It did not really work out though as the hosts went on a 6:2 run and held a 10-goal advantage by the 40-minute mark.

The game continued in the same fashion and the young talents of Sävehof could only close the gap to seven or eight goals, despite some soft turnovers from Györ, who appeared to be cruising to victory.

The match was just like a chess match with the sides trading goals regularly. The perfect sequence developed in front of us with many great shots, turnovers, fast break goals and superb performances from both goalkeepers.

In the first fifteen minutes of the game hosts looked to be more dominant, but eventually Banik Most took a one-goal lead. Even though the Czech defence had problems with stopping the long shots of the Slovenian side, which game them the lead again, goalkeeper Dominika Müllnerovna and the very efficiently executed turnovers meant Most went into half-time just one goal down, 14:13.

The second half mostly reflected the same pattern as the first thirty minutes, but after fifteen minutes Banik Most was able to build up a three-goal advantage, thanks to Müllnerovna, who finished with a 46 per cent save rate.

In a game full of ups and downs, thanks to the fast breaks and technical fouls from both teams, Krim were able toget back into the game and draw level at 28:28 and 29:29, but Jiří Tancos' final timeout inspired Most to grab the lead one final time and claim victory.