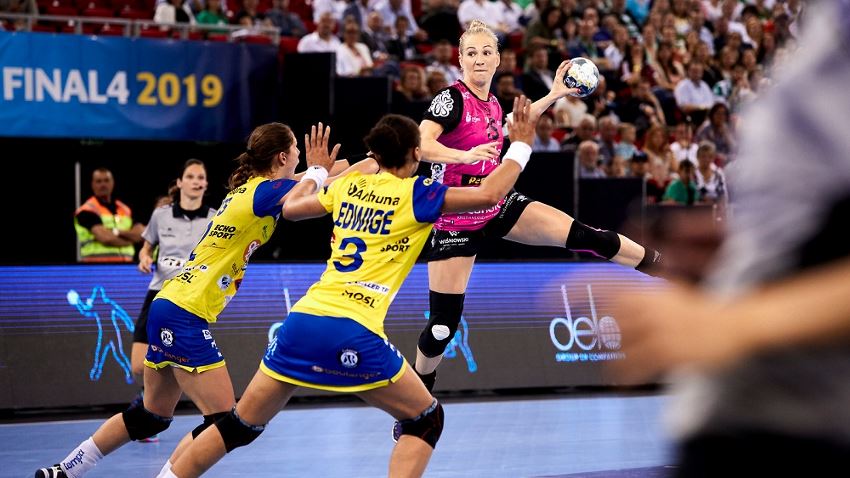 After being defeated in the semi-final on Saturday, Vipers Kristiansand had the chance to celebrate as they secured the bronze medal at their maiden DELO WOMEN’S EHF FINAL4 on Sunday afternoon in Papp Laszlo Arena, Budapest.

For Metz Handball and Vipers, the 2018/19 season was their best in the Champions League, as both reached the semi-finals for the first time – but the Norwegian team will be the ones to leave the Hungarian capital with a medal.

It took 10 minutes for Linn Jorum Sulland to move into first position in the race for her first Women’s EHF Champions League 2018/19 top scorer crown, as she added her second goal in the match to pull Vipers in front 5:2. The Norwegian side enjoyed a great start, but as they did in the semi-final, Metz Handball came fighting back – although it did not take them a full 30 minutes to get their motors running at full speed on Sunday.

By the 13th minute, the French side had drawn level off a goal from Xenia Smits. Up till that point, Vipers had relied on Katrine Lunde in goal, but the four-time Champions League winner suffered a season-ending knee injury that saw her leave the court. Her replacement, Eline Fagerheim, did an admirable job stepping into the rather large shoes of two-time Olympic champion Lunde.

Both sides relied heavily on their back court and line players in what was a high-scoring, tight game. The goalkeepers had some saves but were not the deciding factor. Metz coach Emmanuel Mayonnade switched between Ivana Kapitanovic and Laura Glauser in goal, with the Croatian on for the first 30 minutes and last 10. Glauser made some critical saves but was not in the decisive form that saw her help France towards their first EHF EURO title in December.

After the one-goal difference in favour of Metz at half-time, the French team moved in front to a consistent lead that saw them ahead by up to three goals. Their latest three-goal advantage stood at 23:20, before Vipers drew level and a tense race to the whistle began. Still nothing was decided when the last timeout was called with just over a minute remaining, when Vipers led 30:29. Sulland decided the match with a penalty scored with 20 seconds left.

Right back Sulland now clearly leads the top scorer ranking, but her first crown will not be assured until the end of the final.