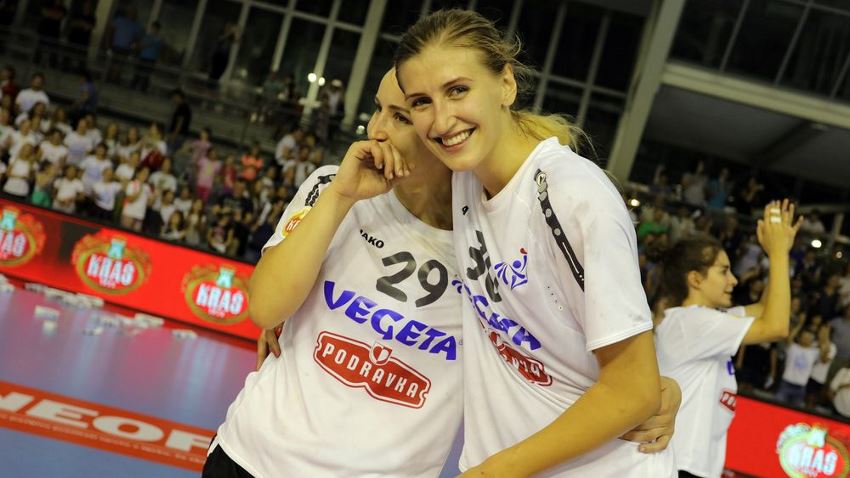 It was not the kind of night the Podravka Vegeta fans dreamed of, but in the end the smiles were on their faces, while the tears flooded Craiova's players eyes.

A heart-breaking loss for the Romanian team as Podravka returned to the group matches of the Women's EHF Champions League after a three-year hiatus.

There was a sense of excitement in the Fran Galovic Sports Hall in Koprivnica as home team Podravka was trying to earn a group matches berth against a plucky SCM Craiova, the current Women's EHF Cup title holders.

The challenge was big, as Craiova showed grit and efficiency in the semi-final against Jagodina and their usual strong defence was on display again in the first part of the game. After a strong start, the Romanian side went 7:4 up, after only 15 minutes, as Podravka were struggline to find holes in Craiova's defence.

It was a two-goal difference at half-time that in favour of Craiova, but it could have been much more. Had it not been for a 3:0 Podravka run to end the first half.

The home side quickly closed the gap and Craiova’s luck in attack appeared to run out, due in part to an unexpected off night from top goal scorer Cristina Zamfir.

However, the game quickly became a cat-and-mouse situation, with the two teams trading goals and five lead changes in the last 15 minutes.

In the end, the hosts had the upper hand, breaking the deadlock with 30 seconds to go to take a 22:21 lead, which could not be overturned by Craiova.

For the second day in a row, Natalia Chigrinova lead the scoring with seven, playing a huge part in Podravka’s win, which sees them reach the competition proper after three years away.

Underwhelming defeats saw both Jagodina and Muratpasa's chances for a group matches berth go up in flames, but the two sides had their pride to play for on Sunday.

The Serbian side looked like the underdogs, but jumped to a healthy three-goal lead at half-time, thanks to the efforts of their back court, especially from veteran Jelena Gojkovic, who was the best scorer of the game with nine goals.

The Turkish champions tried to turn the game on its head, but did not manage to achieve their objective, despite the concerted efforts of the two wings, Beyzanur Türkilymaz and Yasemin Sahin, who scored six goals each.

Jagodina earned their first ever win in their Women's EHF Champions League history, enough for the Serbian side to finish third in the qualifying tournament and progress to Round 3 of the Women’s EHF Cup.