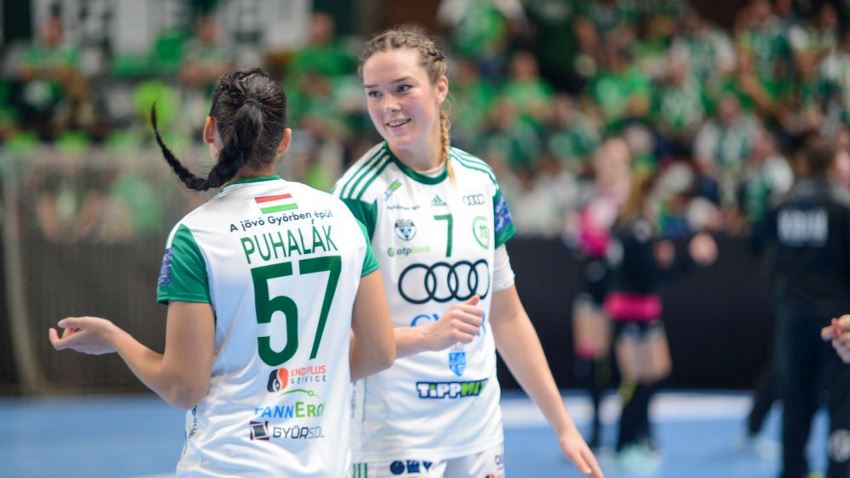 A confident Győri Audi ETO KC did not gamble in Sweden and led from the beginning of their round 5 match in the DELO WOMEN’S EHF Champions League against IK Sävehof. Two totally different squads met as Sävehof have the youngest squad in the Champions League, while Győr have Olympic, world and European champions, and the difference was highlighted on the court on Saturday.

Almost five minutes had passed before the teams opened the scoring. Five minutes later the title holders woke up, taking control to lead 5:2.

Although the score did not disturb the home team, they remained two to three goals behind Győr. However, in defence, the Scandinavian club could not hold back Győr's two centre backs, Stine Oftedal and Estelle Nze Minko, as they both netted four in the first half without any misses – and they also shared many key passes and assists.

The Hungarian record champions started off the second half peremptorily with Amandine Leynaud between the posts. There were no questions left about the outcome after a 6:1 run extended Győr's lead to 25:13. Győr wisely managed the rest of the game and finished with a nine-goal win.

In the last round of the group matches, the five-time Champions League winners host DHK Banik Most, while Sävehof visit RK Krim Mercator in their bid to qualify for the main round.

Despite the defeat, Sävehof captain Linnea Pettersson was pleased with the number of goals they scored, but she also highlighted Nina Dano's performance.

"We scored a lot of goals, more than we do in our own league, so that is really great. I also want to mention Nina Dano, she had a great game for us today, she showed that she’s not afraid and she’s only 18 years old. I think she has a bright future in front of her," she said.