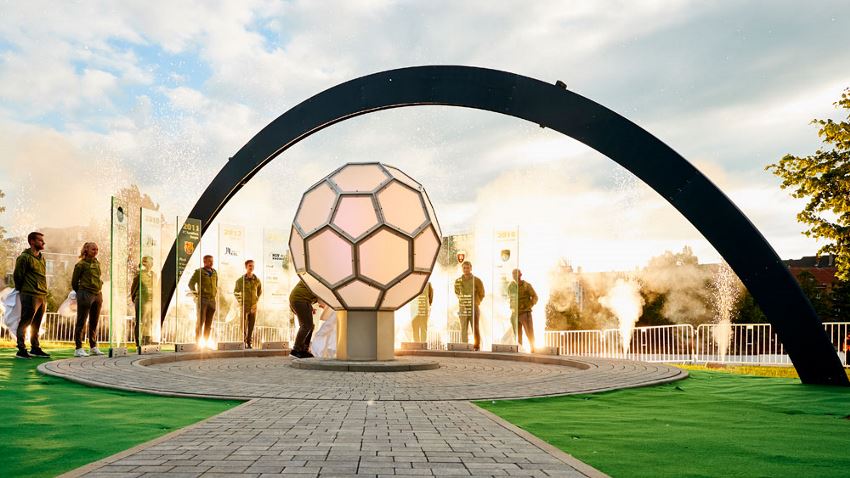 Ball of Fame unveiled in Cologne

In 2019, the VELUX EHF FINAL4 is celebrating its 10th edition in the LANXESS arena in Cologne. This milestone will be honoured with the erection of a permanent handball monument, the ‘Ball of Fame’, which was unveiled on Friday, 31 May during the VELUX EHF FINAL4 Opening Party.

The Ball of Fame has been placed in front of the LANXESS arena and honours all nine previous winners of the VELUX EHF FINAL4.

The monument, designed by Austrian artist Franz Staber, displays a giant handball in the centre surrounded by glass columns representing the event’s winners and with the recognisable LANXESS arena arch stretching over the whole structure.

The monument is an eye-catcher for all visitors to the arena, and especially for handball fans coming to the VELUX EHF FINAL4 this year and in the future as the event will stay in Cologne at least until 2024.

EHF President Michael Wiederer unveiled the Ball of Fame and said: “Thanks to the special cooperation with Cologne and the LANXESS arena, the city has become the capital of international club handball and this needs a symbol.

“The ‘Ball of Fame’ is a joint project between the City of Cologne, LANXESS arena and the EHF, and has been developed together with an artist who himself is a former handball player,” Wiederer said.

“The monument – which honours the nine previous winners of the VELUX EHF FINAL4 here in Cologne – will be a permanent installation dedicated to handball, the EHF Champions League and to the 20,000 fans who come to Cologne each and every year for the ‘handball party of the year’.”

Henriette Reker, Lord Mayor of the City of Cologne, and Stefan Löcher, Managing Director, LANXESS arena, joined Wiederer for the unveiling of the Ball of Fame.

The showcase event of the men’s club handball season starts on Saturday, 1 June, with the first semi-final at 15:15 between Telekom Veszprém and 2016 EHF Champions League winners PGE Vive Kielce. From 18:00, the second semi-final will see eight-time champions Barça Lassa take on HC Vardar, who lifted the EHF Champions League trophy in 2017.

On Sunday, the packed LANXESS arena will not only see the fight for the medals and the trophy but also spectacular entertainment as US duo The Score will take the centre stage before the final match and again just before the award ceremony. Matches on 2 June also throw off at 15:15 and 18:00.