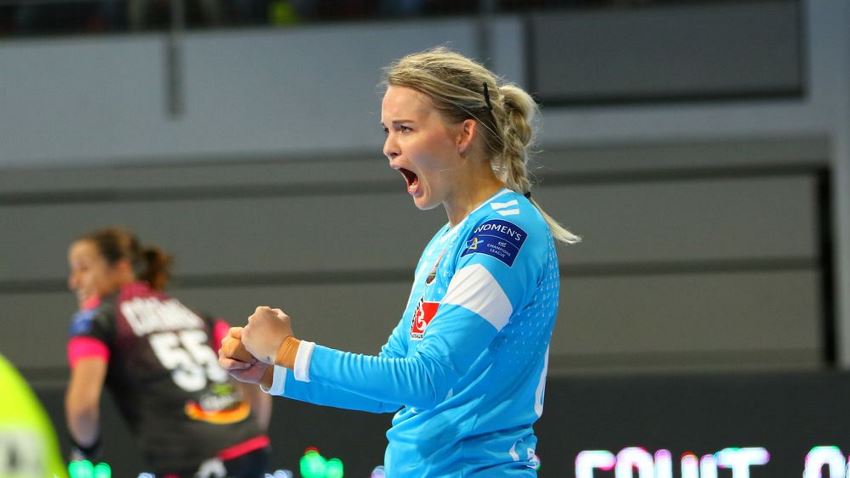 Sandra Toft: “I really want to reach Budapest with Brest”

Sandra Toft has enjoyed a brilliant start to life with her new club Brest Bretagne Handball, whom she joined this summer from Danish champions Team Esbjerg.

The 29-year-old Danish national team goalkeeper has been fantastic in the French team, where she can take her part of the credit for her team being undefeated in the DELO WOMEN´S EHF Champions League as well as in the French league.

“It is always easier to join a new club when the team is winning all the time as we have done. However, I am really happy about joining Brest.

“I felt the need to try something different and that need has been satisfied.

“The club has high ambitions, as do I, so in that respect, we are a perfect match.

“It has been easy for me to get integrated into the team and I am learning French step by step.

“The girls in the team are really nice and I get along with them very well – and then, Brest have the coolest arena I have had as home court, so I have no complaints,” says Sandra Toft, who turns 30 on Friday, a day before she and her Brest teammates take on SG BBM Bietigheim.

She is, of course, aware of the ongoing rivalry between her club and Metz Handball in the French league, a duel, in which Brest has been the little sister so far.

“I hope this season we can leapfrog Metz and take the championship away from them.

“However, that decision is far away as the French championship is decided by play-offs like I am used to from Denmark, so we will not find out until sometime in May, but I can feel the urge in the team and the club to finally take the throne.

“So far, we have every reason to be optimistic,” she finds.

A fast and versatile team

The start to the European campaign has been the best Brest have enjoyed in their three seasons in the competition, winning both of their matches so far.

A 35:32 win away against Buducnost was followed by a convincing 37:24 victory at home against Romanian side SCM Ramnicu Valcea.

The win in Montenegro against Buducnost was the one that drew the most attention as Buducnost seldom concede as many as 35 goals, particularly not at home.

“I was quite stunned by our performance in that game as well. However, we play very fast, and that caused Buducnost serious trouble, as it has also done to our other opponents this season.

“Furthermore, we are a versatile team with many good players.

“This means that our opponents’ defence cannot afford to focus on just one or two, and that makes their job extremely difficult,” says Sandra Toft, who gained her first top flight experience with Norwegian side Larvik before joining Esbjerg in 2017.

Her personal success, as well as the success of her team, has already made her dream big about the near future and the DELO WOMEN’S EHF FINAL4 is the target.

“Of course, it is always a bit dangerous to make firm predictions on how far we can get at such an early point of the season.

“However, it is no secret that I have high ambitions, and that I would very much like to reach Budapest and I would also like it to be this season already.

“First of all, however, it is a question of reaching the main round with as many points as possible to boost our chances to proceed to the quarter-finals.

“Brest have never been in the quarter-finals and I can feel how much they want it this season.

Any away game is difficult

The next assignment for Brest and Sandra Toft will be German champions SG BBM Bietigheim away from home.

The match in Bietigheim Bissingen will be top against bottom, Brest having maximum points and Bietigheim being the only team in group C without a point.

“It is still an away game in the Champions League, though, and as such, it is a difficult task.

“We go to Germany with plenty of confidence and belief in ourselves. If we can take a win in that match, things really look good for us in terms of making it to the quarter-finals, so we will do what we can to make that happen,” promises Sandra Toft.