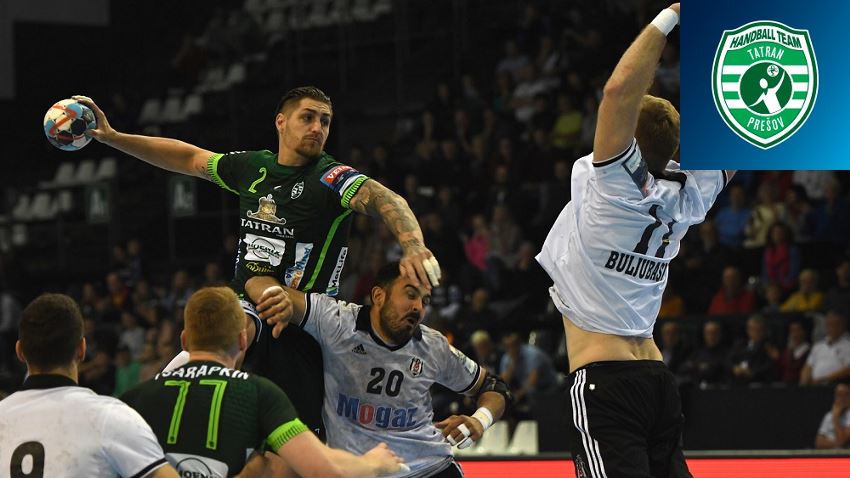 Tatran Presov have had their difficulties in the VELUX EHF Champions League during the past seasons. They even stranded in qualification six times in the past 10 years.

But with a young squad they are eager to show their best in the group phase in 2019/20. Led by former Olympic and world champion Slavko Goluza, Presov are targeting the Groups C/D play-off, which they missed only on goal difference last season.

- How far can Tatran Presov go?

The Slovak champion are still the benchmark in their domestic championship. They just bagged their 13th straight title, and 15th overall, bringing them their 16th participation in Europe’s elite competition. “The VELUX EHF Champions League is the very best that club handball offers. It is a reward for our continuous effort and sporting highlight for the city, region and its people,” says the club’s sport director Miroslav Benicky.

Presov reached the Last 16 only once, back in 2005. It is something that everyone in the club is dreaming of but they are aware it is not easy to repeat that feat. But the objectives for the season are clear: “Considering our solid performances last season, our ambition is to fight for the top-two places in the group,” says Benicky.

The team has one of the most experienced players as their leader: Martin Stranovsky returned to Slovakia last season after 13 years abroad. “Our group is not the hardest but can be very tricky. Each game will be hard and we will have to give over 100 percent to succeed,” the team captain says. “'I think that the favourites of the group are Sporting. We will fight for the second position with Sävehof and Bidasoa Irun. At the same time, the away matches against Cocks and Rabotnik cannot be underestimated.”

- How much has the squad changed?

Coach Goluza will miss Bruno Butorac, an important part of the offence. He moved to France - as did Jakub Hrstka and Tomas Cip. Tatran continue with diversity in their locker room: newcomers Nino Grzentic, Rares-Marian Fodorean, Javier Munoz Cabezon, Josef Hozman and David Michalka will try to take the next step in the VELUX EHF Champions League as well as the SEHA-League, while they want to retain their dominance in the domestic league.

Under the spotlight: Martin Stranovsky

The team captain is going into his second season with Tatran Presov. One of Slovakia’s most prolific national team players returned to the country last season after 13 years abroad. He was an immediate reinforcement for the team. With his rich experience he will lead the many younger newcomers in the fight for the elimination matches. With high expectation on his shoulders he continues to be the backbone of the team.

“The public has called our group ‘easy’ but this is not the case by any means. All opponents are either champions or placed second in their domestic championship. Every team will be especially motivated and strong at home,” says Benicky. Tatran have enough self-esteem to win matches at home, but they will need to step up their efforts in away matches: in past seasons they lost too many points which turned out to be important in the later stage of the group phase.

In late 2017 Tatran Presov introduced their new mascot: Nestor, the horse. It has played a crucial part in the entertainment shows at the arena. This season, Nestor will get a big help from the stands as Tatran’s fan club has been newly organised to give the team additional support. The Tatran Handball Arena will be even harder to conquer this season.

Nine is the number of nationalities represented in Tatran Presov’s squad after the club added players from various countries in the off-season. The squad now boasts players from Slovakia, Croatia, France, Slovenia, Spain, Czech Republic, Romania, Ukraine and Russia.

A post shared by HANDBALL TEAM Tatran Prešov (@_tatranpresov_) on