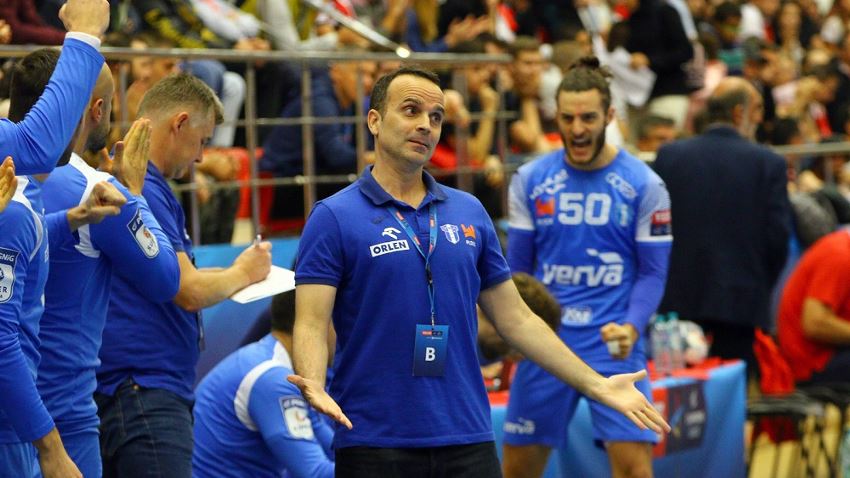 Sabate: “Nothing will be decided in first match”

The four best teams from VELUX EHF Champions League groups C and D return to action this weekend, as the battle for two places in the Last 16 starts.

“The rivals are a really good team. We will try to get a positive result in the first match, but nothing will be decided on Saturday. For me, the chances are fifty-fifty,” says Xavier Sabate, the Spanish head coach of Wisla, ahead of the first leg in Poland on Saturday (live on ehfTV.com at 15:00 CET).

The decisive return leg will be played in Spain next week Saturday.

“We are ready to fight”

Since the end of the EHF EURO 2020 in January, Wisla have played five domestic league matches and won four of them, including the 33:16 drubbing of Grupa Azoty Tarnow with Michal Daszek’s stunning 18-goal outing, a national Polish record.

“We had a lot of simple mistakes and the counterattacks of Kielce were decisive,” Sabate said after that match.

So, where do Plock really stand after the winter break?

“We have started in the best shape possible after the EHF EURO. Of course, with some problems, as every single team had with players in that tournament,” Sabate says.

“We have a good atmosphere inside the group and clear ideas how to play, so we are ready to play and fight against a good rival like Bidasoa,” the coach adds.

“They will get recognised”

Returning to the EHF Champions League after 24 years, when they reached the final, the 1995 champions Bidasoa have impressed with a near-flawless campaign in group C.

The Spanish side remained unbeaten for nine matches and only lost to HC Eurofarm Rabotnik in the last round, when their qualification for the group phase knockout had already been secured.

“The results of Bidasoa in the Champions League say everything,” Sabate says. “They are playing very, very good, especially in the defence. Even if Bidasoa don’t have already well-known names in the roster, they still have players with high quality who will get recognised by a wider public in the near future.”

A post shared by SPR Wisła Płock (@sprwisla) on

But contrary to Wisla, the Spanish side are having a rough time in their domestic league, losing three of their last four matches and only getting a draw against Benidorm in their most recent match.

Sabate, however, isn’t reading too much into those results.

“The Spanish league is much stronger than many people think. For me it’s not important,” Sabate says about Bidasoa’s winless streak.

“This is the beauty of handball”

Wisla will throw off the two-leg encounter with Bidasoa in front of their Polish home crowd on Saturday.

“We have to play in a clever way, knowing there will be one more game to play,” Sabate says. “We count on the support from our fans, but we know it will be really tough.”

For both teams, the best scorer this Champions League season has amassed 40 goals so far: Kauldi Odriozola for Bidasoa and Spanish playmaker Niko Mindegia for Wisla.

If Wisla might not get the desired result on Saturday, the Polish team and their fans will definitely think back to the group phase knockout last year.

In the first leg at home, Wisla lost 26:22 to Bjerringbro-Silkeborg, but wiped away that four-goal deficit in the return leg in Denmark the following week with a 27:20 victory, in a match no Wisla fan will likely ever forget.

“This is the beauty of handball. You never know what is going happen,” Sabate says. “We now know that whatever the result will be on Saturday, the game won’t be over.”