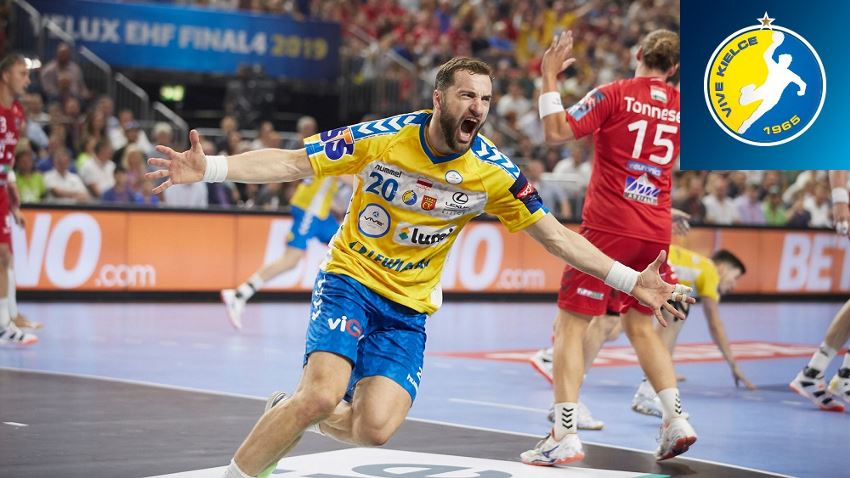 PGE VIVE Kielce, led by Talant Dujshebaev and Uros Zorman, are still being rebuilt, being a mixture of experienced players and young talents from around the world.

They want to use their multinational experience to rock Europe once again. Will the 2016 champions and fourth-placed team from last season make it to Cologne again?

- How will the coaches manage with another year of rebuilding the team?

This year the team is going through another personal revolution. With six players left and seven joining the crew, the coaching duo of Talant Dujshebaev and Uros Zorman has no easy task to handle. “The new project that we create together is very interesting. It’s great to be a part of it. Together we can create an amazing team that will reach the VELUX EHF FINAL4 again,” says coach Talant Dujshebaev.

With two new goalkeepers and five new field players, an obvious goal is to focus on the defence formation first and this is exactly what the team practises during the preparations. “This is how it looks like usually, you always start building the team starting from the goalkeepers, defence and then the attack,” says Krzysztof Lijewski.

When everything works out, a composition of old names like the Dujshebaevs, Lijewski, Janc, Aguinagalde and newcomers as Karacić, Wolff or Pehlivan will rock the contest again. “We did great shopping,” Uros Zorman says with a smile. “I can’t wait to start the season.”

- How will the new goalkeepers’ duo work out?

After the departure of both Kielce’s goalies, Vladimir Cupara and Filip Ivić, the Polish champions have replaced them German standout Andreas Wolff and Polish talent Mateusz Kornecki, coached by former Kielce goalkeeper and World Player of the Year 2009, Slawomir Szmal.

“All fans know Andreas from his spectacular saves at the EHF EURO 2016 in Poland,” says Slawomir Szmal. “His big advantage is his physical preparation, if you look at him, you see an ideal athlete figure, so we will mainly work on the mental zone so that he is ready to be the leader of the team. Mateusz is still a young player who has got a whole career ahead of him, but he already showed in the national team that he is able to play on highest level and now he is going to compete with one of the best goalies in the world.”

As previous season, main goalkeepers will be supported by 17-years-old Milosz Walach, who had his spectacular debut in the Champions League in March 2018, when he stopped a penalty against Rhein-Neckar Löwen.

A must for Talant Dujshebaev’s team is the quarter-final. After games like the 2016 final against Veszprém or last season’s quarter-final against PSG every handball fan knows that with Kielce you never know. Kielce will avoid dangerous opponents like PSG or Barça in the group phase, the pressure to win the group will be higher.

“Vardar won the Champions League past season and we don’t need to tell anyone who Veszprém are, they have been on the top of European handball for many years. THW Kiel are coming back to the contest. But I would prefer the group with Barça and PSG,” says the club’s President, Bertus Servaas. “The main favourites are in the other group, which is not good for us. In order to avoid playing against them in the next stage we need to finish first or second in our group.”

Under the spotlight: Andreas Wolff

The German goalkeeper has been awaited in Kielce for nearly two years, since the transfer had already been announced in 2017. After winning the EHF Cup with Kiel, Wolff is coming back to the VELUX EHF Champions League. Liked for his openness, sense of humour and fast language learning, Wolff has been named the new captain of the team. “I feel pretty nice, of course at the beginning I was a bit surprised because becoming captain on your first day with a new team is not an everyday decision,” Wolff says. “I think I’m someone who has a strong opinion and is able to defend his own view, so if there is something to be done for the team, I will represent the unity of the team.”

Kielce’s goals haven’t changed in recent years. The club still wants to defend all the domestic titles and be a part of the VELUX EHF FINAL4 tournament in Cologne, but first of all the minimum plan is to find a place among the eight best teams in Europe. “It’s a huge pleasure for me to watch our players as a team fighting for the highest goals, to see how the older players share their experience with the younger ones and how the debutants gain their first memories in the Champions League representing our town, region and country,” says president Bertus Servaas.

Since Talant Dujshebaev took over in 2014, the team had their training camp this summer in the Polish Bieszczady mountains for the second time. It’s a lucky place for Kielce: the first time Kielce prepared here for a season was in 2015 - 10 months before they won the Champions League and both domestic titles.

Kielce have a few ‘ones’: Doruk Pehlivan is the first Turkish player in the Polish league, Romaric Guillo the first French player, and Andreas Wolff the first non-Polish captain of the team. There are also ‘two’s’: this is the second time Kielce have signed the MVP of a recent EHF FINAL4 – now it is Igor Karacić, last year it was Luka Cindrić.