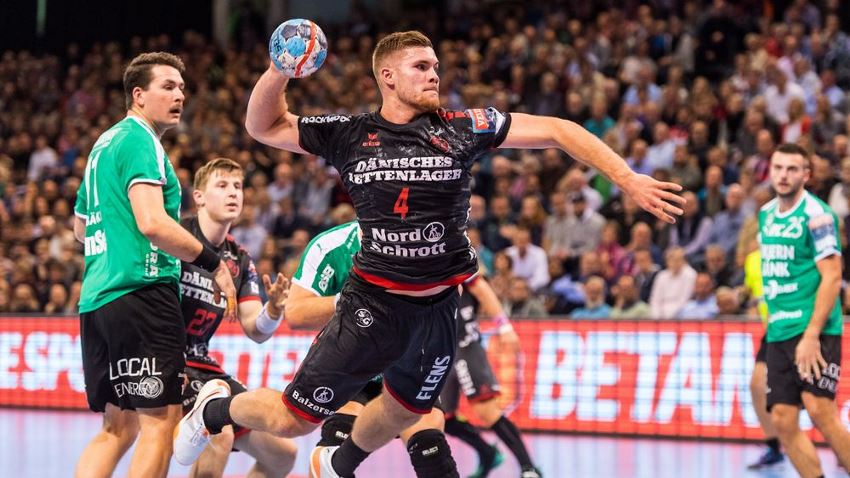 Johannes Golla is a rare species in the Scandinavian dominated squad of SG Flensburg-Handewitt. Besides 2007 world champion Holger Glandorf, the 21-year-old line player is the only German among the 16 players usually on court for the German champions.

Last summer, the powerful Men’s 20 EHF EURO 2016 silver medallist arrived from MT Melsungen and although he was supposed to be a pupil among many experienced teachers such as club legend Tobias Karlsson, Golla has already established himself as a regular in the team.

The upcoming VELUX EHF Champions League Quarter-final against Telekom Veszprém is set to be his biggest test to date.

So far, Golla has scored 28 goals in the competition, providing another attacking threat on the line alongside Danes Simon Hald Jensen and Anders Zachariassen, while in defence he stands next to Karlsson, who will have his last European home match on Wednesday in the first leg against Veszprém (19:00 hrs local time, live on ehfTV.com).

“It is fun to work with this boy, the quality and passion is incredible for a 21-year-old player,” Flensburg’s coach Maik Machulla said about his rising star.

“I can learn so much from all other line players around me, either in the club and in the national team,” says Golla, who made his debut in the German men’s team in March against Switzerland.

“It was definitely the right decision to transfer to Flensburg to gain international experience,” Golla added: “It was great to spend a week with all those national team stars, which I had known before only as opponents from the Bundesliga matches, such as Wiencek, Pekeler and Kohlbacher. It was great to learn from them.”

Golla was one of six new arrivals at the start of the season. “The team integrated us well and as we play at a high level, I am fully satisfied with this season so far. But the crunch time is still ahead.”

In the Bundesliga, Flensburg are on top, despite recently losing against Magdeburg - their first defeat after 32 victories in a row.

In the VELUX EHF Champions League, Flensburg had some ups and downs in the group phase, before they eliminated Meshkov Brest in a dominant way in the Last 16.

But now comes Veszprém, a team Golla has never faced before.

Of course, it is my dream to be part of the VELUX EHF FINAL4,” Golla says, knowing that getting past the three-time finalists will be far from easy, but challenges like this is the very reason he made the move to northern Germany.