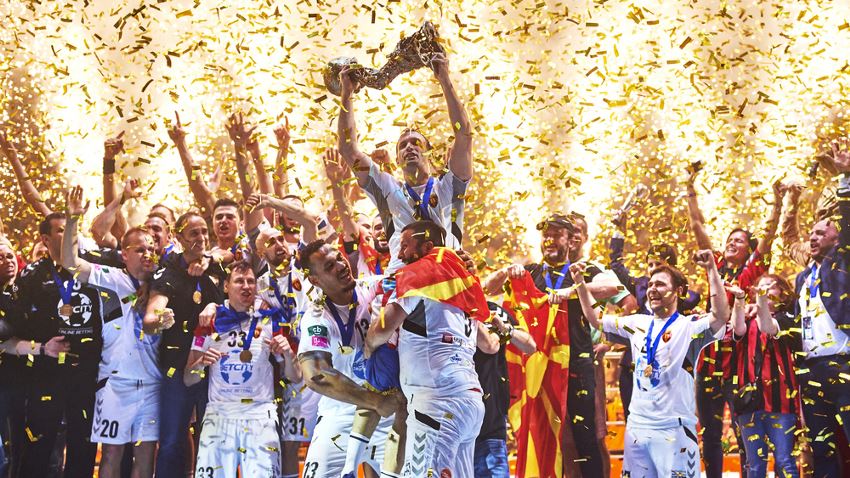 HC Vardar again! For the second time after 2017 and in their third participation at the VELUX EHF FINAL4, the Skopje-based team took the VELUX EHF Champions League trophy.

Coach Roberto Garcia Parrondo’s side beat Veszprém 27:24 in an intense final – and extended the Hungarian record champions’ final curse. For the fourth time after 2002, 2015 and 2016, Veszprém were finalists – for the fourth time, they were defeated.

The good news for both sides was the squad list: Veszprém’s Arpad Sterbik and Vardar’s Igor Karacic, who were injured in the semi-finals, could play. While the Vardar playmaker was in the starting seven, Sterbik was on the bench.

Though Vardar had played the second match on Saturday – an intense battle to eliminate Barcelona 29:27 – they had the clearly better start to the final. Veszprém had problems in attack, while Vardar counted on goals from line player Rogerio Moraes and later a strong game from centre back Stas Skube. After only 15 minutes, the Macedonian side had scored the same number of goals as they did in the entire first half against Barcelona – nine, to be ahead 9:6.

Neither a knee injury for Daniil Shishkarev in minute 13 nor a timeout from Veszprém coach David Davis could stop the Vardar express. Sensationally, the EHF Champions League 2016/17 winners pulled ahead to 16:10, taking almost the same margin to the locker room (16:11) – incomparable with the 9:16 deficit at half-time the day before.

But then came Sterbik! Two years ago, he steered Vardar to the trophy in Cologne. On Sunday, he was the reason Veszprém improved. His presence and saves caused some state of confusion in the Macedonian side, and Veszprém only needed 10 minutes to turn an 11:16 score line into 16:17. Vardar coach Roberto Parrondo immediately took a timeout.

The match was on the edge, and Sterbik was on fire. Vardar managed to keep their advantage, but they could feel Veszprém’s breath on their necks. Apart from a score of 24:21 in favour of Vardar in minute 54, the gap did not grow larger than two goals until the end. Veszprém defended extremely offensively, putting enormous pressure on the Macedonian team’s attackers.

But Vardar managed to withstand the pressure. When goalkeeper Dejan Milosavljev saved against line player Blaz Blagotinsek and Dainis Kristopans netted for 25:23, the gate to the podium was wide open. Then the now three-time Champions League winner Ivan Cupic scored for 26:23, and the next episode of the Vardar miracle story was written. Finally, another Cupic goal for the score of 27:24 sealed the deal.

“I am just empty now. There is so much behind the scenes in our club currently, which somehow distracts you from playing good handball. Nevertheless, we take home that trophy – crazy,” said Vardar’s German back Christian Dissinger. “We almost lost Igor [Karacic] yesterday, but he came back. I was injured a few weeks ago, so this is unbelievable for me.”

The loss meant that Sterbik missed the chance to win his fifth Champions League title, while his teammates Momir Ilic and Laszlo Nagy ended their careers without adding another trophy to their cabinets. Ilic also finished behind Macedonian Kiril Lazarov in the all-time top scorer list, with 58 goals to Lazarov’s 65.

“We had such a hard season – lots of changes in the team and in the background, losing our coach and my good buddy Ljubomir [Vranjes]. So, we wanted to reward ourselves with that title,” said Mahe. “I am just sad, but I am even more sorry for Laszlo and Momir. Ending such astonishing careers with such a defeat – that’s more than a pity.”