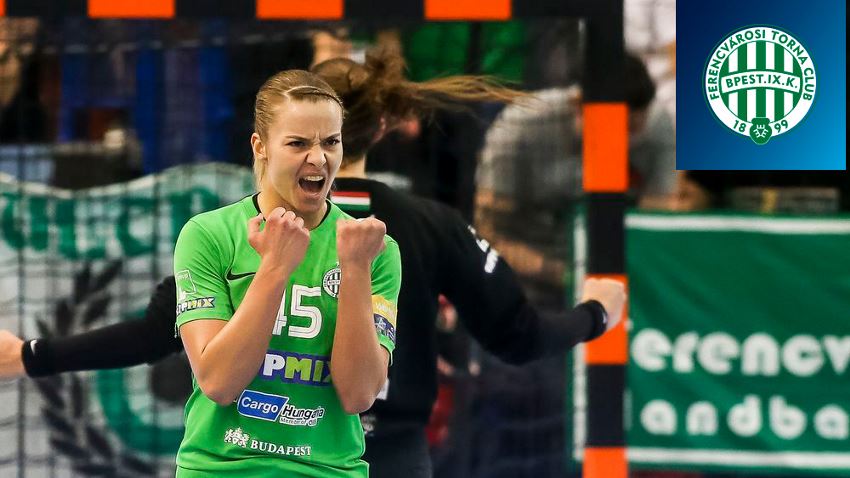 Has the time come for FTC?

The feeling from FTC captain Aniko Kovacsics is that the Budapest-based side will have more challengers than ever before to reach the season's showcase event. “I think the teams are stronger than the previous years, so it is hard to predict who will reach the DELO WOMEN’S EHF FINAL4. More teams have become strong enough to be able to get to the final stage," she said.

- What factors can make the difference for FTC this season?

On the court, top-class young players Noemi Hafra and Katrin Klujber have shown that they can play as leaders when required. Noemi Hafra was voted the best young player in the DELO WOMEN’S EHF Champions League All-star team in the 2018/19 season, and Katrin Klujber was voted EHF Player of the Month in February 2019. Further progression from Hafra and Klujber would make FTC an extremely dangerous proposition for opponents.

Away from the playing area, an important factor that can make a difference for FTC are their fans. FTC’s fans always support the team as an eighth member, especially during Champions League matches, and this is acknowledged by head coach Gabor Elek.

“Even though our fans are behind us during the national championship games, we can also feel that the Champions League games have an impression on our supporters. They also feel it is a challenge,” said Elek.

- Will this season’s group matches be harder for FTC?

In 2018/19, FTC were faced with arguably the most interesting group in the competition, as they faced CSM Bucuresti, Vipers Kristiansand and SG BBM Bietigheim. This season, however, may prove even tougher.

FTC will again face Vipers Kristiansand in the group matches, but they will also meet Metz Handball and HC Podravka Vegeta. With Vipers and Metz in group A, FTC will have to face two teams who reached last season's DELO WOMEN’S EHF FINAL4.

"We are in a tough group. There are two teams from last year's EHF FINAL4 against whom we have to fight. Our goal is to qualify to the next stage with as many collected points as possible, because the next round will be even harder." said team captain Aniko Kovacsics.

- Can Ferencváros maintain their position in the Hungarian League?

FTC have been among the top two clubs in Hungary for many years, with only defending Champions League winners Györi Audi ETO KC outperforming FTC.

Everyone at Ferencváros would like to maintain their position in the top two, but the reality shows that it will be harder than ever. A third team has now risen to the top: Siófok KC Hungary. Siófok won the EHF Cup last season and finished in third place in the Hungarian league, but this summer they signed Zsuzsanna Tomori from Györi Audi ETO KC, Gnonsiane Niombla from Metz Handball and Nerea Pena from FTC.

FTC have strengthened themselves by adding Norwegian centre back Emilie Christensen to their squad, plus young players Nikolett Tóth and Kíra Bánfai have both returned from loan. Both the U17 and the U19 Hungarian national teams won European championship titles this summer – and four FTC players were included in the winning squads, so the future is bright in the Hungarian capital.

Under the spotlight: Noemi Hafra

Hafra has quickly established herself as one of FTC’s best players. The All-star left back at the Women's EHF EURO 2018 also had a breakthrough season in the Champions League, scoring 80 goals for FTC and finishing as the second highest scorer in the competition.

Hafra believes in her teammates and likes her side’s attacking qualities. “Last year was a big step for the youngsters and for me as well. Our squad is very young this season. Our offence is stronger than ever and I think that this is our main strength. Someone always stands out with a great performance,” said Hafra.

Reaching the DELO WOMEN'S EHF FINAL4 has, to date, eluded FTC, but there remains a strong belief heading into this season's campaign. "It's an old dream for us to get into the Final Four, and we always do our best to reach this stage. Moreover, we also believe that we are capable of doing it," said Gabor Elek.

FTC earned two draws against eventual champions Györi Audi ETO KC in the 2018/19 season. They were the only side to play against Györ and avoid defeat.

FTC have lost all eight legs of their last four quarter-final ties. Producing their best handball at the knockout stage of the Champions League has eluded FTC in recent times.

The Hungarian team 🇭🇺 @Fradi_HU are more than ready for a new chapter in their careers.
Which match are you waiting for the most? #deloehefcl #ehfcl pic.twitter.com/45TL8uD54X