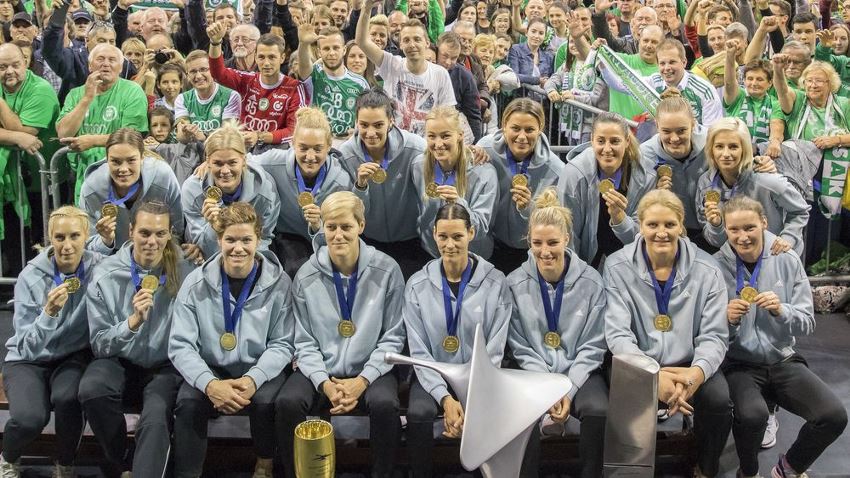 For the first time since the introduction of the Women’s EHF Champions League in 1993 a team has won the competition three years in a row.

Györi Audi ETO KC rewrote the history books with their triumph at the DELO WOMEN’S EHF FINAL4 in Budapest on Sunday. The defending champions beat first-time finalists Rostov-Don 25:24 thanks to Kari Aalvaik Grimsbø’s last-second save on a Lois Abbingh attempt.

Denying Ambros Martin’s team a late equaliser was the crown on the goalkeeper’s great performance during the match, which earned the title of the event’s MVP.

... and continued the party on Monday in home town Györ, where the crowd was excited while they were waiting for their heroes.

Like last year the Mayor of Györ, former Olympic gymnastics champion Zsolt Borkai, and the president of the club, Csaba Bartha, welcomed the historic result and thanked the staff and most importantly the fans for the support.

“You are the best fans of the world. You are with the girls in any circumstances and they can always feel the love you show towards them,” Mayor Borkai started his speech.

Singer-songwriter Zsuzsa Kollányi appeared in a Anita Görbicz jersey - to celebrate the Györ legend’s 36th birthday. She sang the title holder’s favourite song together with the team and with the fans (from 32:50 in the video below).

When coach Gábor Danyi told the crowd that he was tired, but that this was a sweet tiredness, huge applause sounded.

“You, the fans are just like my team,” Danyi said. “Unbelievable and inimitable.”