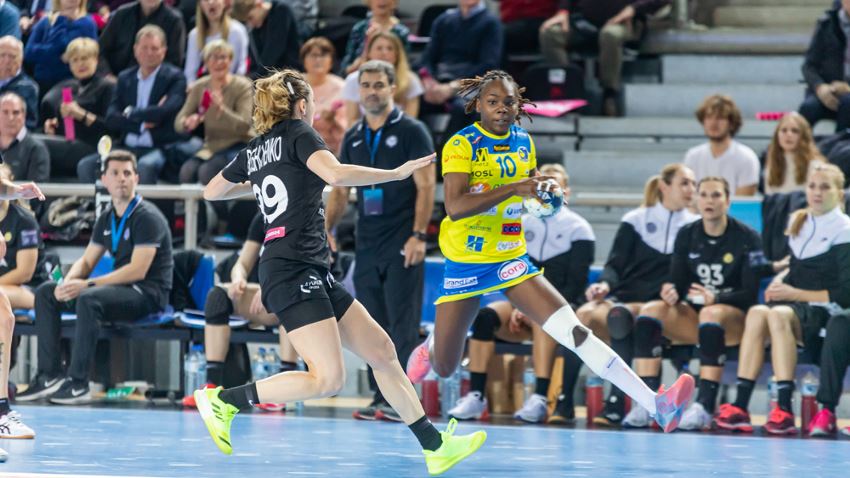 Vipers and Esbjerg had never met before in a European club competition, but in an exciting debut clash, Esbjerg were more clinical in attack and claimed a 35:31 victory in a match which both teams could have won.

And, just like a year ago, Metz opened their main round campaign with a home victory against Rostov, winning this time. 23:20.

The first half saw an extremely tight match, best illustrated by neither team able to pull clear by more than two goals. In attack, both Marta Tomac and Malin Aune did a good job for Vipers, but Esbjerg were slightly better and more efficient as a team.

It looked like the game would go into the half-time pause all-sqaure, at 15:15, but Sanna Solberg put Esbjerg in front seconds before.

Solberg’s goals and Rikke Poulsen’s saves powered the visitors to a 20:16 lead early in the second half, yet the home side refused to give up and drew level again, 23:23, with the final quarter to come (45th minute).

However, Esbjerg weathered a Vipers storm to pull clear again, 30:26 with nine minutes to go as the Danish side’s defence worked hard, while in attack, Kristine Breistol, Sonja Frey and the newly-crowned world champion and MVP of Japan 2019, Estavana Polman, scored goal after goal.

Overall, Esbjerg’s attack was efficient in the second half, and the visitors went on to clinch a well-deserved victory, which helped them to leapfrog Vipers in the group 1 table.

“We are disappointed to have lost but today we lost to a better team,” said Vipers coach Ole Gustav Gjekstad. “We struggled a lot in defence, and we have to improve if we are to progress to the quarter-finals. Although we have been struggling since the first matches, I think we still have a good chance to go through and we will improve through playing international games, and hopefully we’ll be better against Rostov next weekend already.”

Esbjerg’s Sonja Frey praised the arena and atmosphere in what was a successful day for her side. “It was really intense, and we were at the same level for long parts of the match,” she said. “At the beginning the match was so fast and Vipers were running so much but I’m really happy that we won in the Aquarama which always has a good atmosphere and is nice to play in.”

In the group stages, Rostov suffered a solitary defeat, at Esbjerg, in a match where Anna Vyakhireva did not play due to illness.

Today, she was also missing, picking up an injury just before the team flew to France, and it turned out to be a bad sign for the Russian team as, once again, Rostov lacked firepower in attack without their emblematic player.

Yet thanks to their goalkeepers; Mayssa de Oliveira Pessoa and Anna Sedoykina, who boasted a combined save rate of 40% in the first half, they managed to stay level with the hosts at the break, 11:11.

However, Metz were the clearly-dominant side for much of the second half. Their defence was rock-solid and conceded just three goals in a 20-minute spell (31st-51st minute), helping them to pull clear at 21:14 to effectively decide the match.

Rostov’s players made too many mistakes during that spell and were punished by the home side time after time. Notably Grace Zaadi, who will move to Rostov in summer, who scored five goals against her future team.

However, the Russian team should be given credit for their efforts late in the game, when they finally improved their attack to slash the gap to just two goals down, 22:20.